In a paper called “Interstellar Propulsion Opportunities Using Near-Term Technologies,” Dana G. Andrews (Andrews Space, Seattle) sees two criteria for an interstellar mission. First, it must return results within the lifetime of its principal investigator or the average colonist. Second, it must find cost-effective ways to generate energy and to convert raw energy into directed momentum. These are steep requirements — we’re talking 15 to 20 percent of the speed of light, or 45,000 to 60,000 kilometers per second.

Centauri Dreams questions the first criterion, but the need for efficient and effective propulsion is true no matter how fast a mission we manage to design. Robert Forward’s massive Fresnel lenses (1000 kilometers in diameter 15 AU from the laser source) are one of those ‘small problems in engineering’ that the irrepressible Forward managed to concoct while not violating known physics. And Andrews points to a lightsail alternative — building solar-pumped or electrically-powered lasers in the million gigawatt range, allowing a spacecraft to be accelerated to thirty percent of the speed of light within a fraction of a light year with a more achievable 50 kilometer lens. 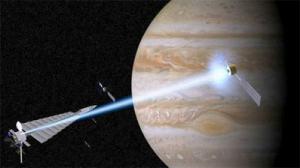 But Andrews sees a better alternative in a particle beam boosted magsail (PBBM) that substitutes a neutral plasma beam for the laser and uses a magnetic sail instead of a lightsail. The benefits are enormous: a six order of magnitude reduction in the power required during acceleration, with comparable savings in the cost and complexity of the craft itself. Moreover, Andrews’ PBBM gets two to three orders of magnitude increased force on the sail for the same beam power, and eliminates the need for a separate deceleration system, since the magnetic sail can provide needed braking.

Image: In this artist’s conception, a plasma station (lower left) applies a magnetized beam of ionized plasma to a spacecraft bound for Jupiter. Could a fleet of such stations provide enough acceleration to drive a probe to the stars? Credit: John Carscadden, University of Washington.

A magsail uses a magnetic field to accelerate or decelerate by interacting with the plasma found in the solar wind and the interstellar medium. Geoffrey Landis, whose revised paper on the subject was discussed here two days ago, was the first to suggest particle beam acceleration of a magnetic sail back in 1989. Andrews, who has written key papers on magnetic sails with Robert Zubrin, provides in this new study a system description of a possible magsail for plasma beam use. Here is his description of the magsail in the deceleration phase as it approaches its destination star:

The Magsail…makes an excellent brake for an interstellar spacecraft traveling at fractions of the speed of light. A magnetic field moving at relativistic speeds ionizes the interstellar medium and then deflects the resulting plasma, creating drag, which decelerates the spacecraft. The ability to slow down spacecraft from interstellar to interplanetary velocities without the expenditure of rocket propellant results in a dramatic lowering of the total mission mass…

As for the acceleration phase, the physicist sees large interplanetary freighters in the manner of Robert Heinlein’s ‘torchships’ that can provide plasma beams along the flight path — he is assuming that a single neutrally charged beam will disperse after 1 AU, making booster beams necessary for some payloads. So useful is the magsail that it could also be used in a hybrid mission combining lightsail acceleration with magsail deceleration upon arrival at the target star.