Scientists anticipated that Titan would be a model laboratory for studying the organic chemistry that eventually led to life on the primitive Earth. So the discovery of complex mixtures of hydrocarbons and carbon-nitrogen compounds came as no surprise. What was unusual was where they found them: in Titan’s upper atmosphere. 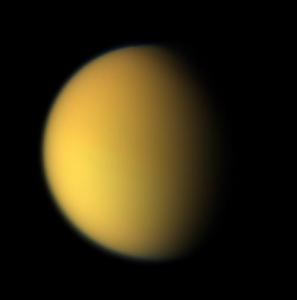 Organic materials were expected on Titan because nitrogen and methane, the two primary components of its atmosphere, should form complex hydrocarbons when exposed to sunlight or energetic particle radiation from Saturn’s magnetosphere. But the frigid temperatures on the Saturnian moon led most researchers to believe such hydrocarbons would condense and eventually wind up on the moon’s surface. Instead, Cassini’s ion and neutral mass spectrometer helped them find hydrocarbons galore in Titan’s outer atmosphere.

Image: This natural color composite (taken during the April 16 flyby) shows approximately what Titan would look like to the human eye: a hazy orange globe surrounded by a tenuous, bluish haze. The orange color is due to the hydrocarbon particles which make up Titan’s atmospheric haze. This obscuring haze was particularly frustrating for planetary scientists following the NASA Voyager mission encounters in 1980-81. Fortunately, Cassini is able to pierce Titan’s veil at infrared wavelengths. Credit: NASA/JPL/Space Science Institute.

“We are beginning to appreciate the role of the upper atmosphere in the complex carbon cycle that occurs on Titan,” said Dr. Hunter Waite, principal investigator of the Cassini ion and neutral mass spectrometer and professor at the University of Michigan, Ann Arbor. “Ultimately, this information from the Saturn system will help us determine the origins of organic matter within the entire solar system.”

More on these findings in this Jet Propulsion Laboratory news release. Cassini’s most recent flyby occurred on April 16, as the spacecraft approached within a little over 1,000 kilometers of the moon’s surface. It was Cassini’s sixth close approach, but 39 more are scheduled, the next on August 22.

And be aware of this interesting news re Enceladus. The Cassini encounter with the moon on July 14 will now take place at a much lower altitude than the 1,000 kilometers first planned. The new target is 175 kilometers (109 miles), the lowest altitude flyby of any object planned for the Cassini mission. The change comes amid news that Cassini has discovered dust particles near Enceladus that indicate either a dust cloud around the moon, or interaction with Saturn’s outermost ring. “It will take a few more flybys to distinguish if the dust flux is originating from the E-ring as opposed to a source at Enceladus,” said Dr. Thanasis Economou, lead researcher on Cassini’s high rate detector, part of a larger instrument aboard the craft called the cosmic dust analyzer.