The race to confirm the first image of an exoplanet takes yet another turn with the announcement that a young brown dwarf some 200 light years from Earth really is orbited by a planet that is five times the mass of Jupiter. We looked at this brown dwarf, called 2M1207A, in an entry last September. When the object visually near it was first discovered about a year ago, there remained the possibility that the apparent planet was a background star. But new observations seem to rule this out.

“Our new images show convincingly that this really is a planet, the first planet that has ever been imaged outside of our solar system,” says Gael Chauvin, astronomer at ESO and leader of the team of astronomers who conducted the study. 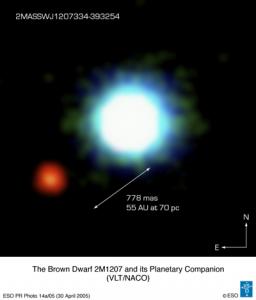 And Benjamin Zuckerman, UCLA professor of physics and astronomy and a member of the international team working on 2M1207A, adds this:

“The two objects – the giant planet and the young brown dwarf – are moving together; we have observed them for a year, and the new images essentially confirm our 2004 finding. I’m more than 99 percent confident.”

The giant world now called 2M1207b is located some 55 AU from its parent, which would place it well beyond the orbit of Pluto in our Solar System. 2M1207b is 100 times fainter than the brown dwarf it apparently orbits, and its spectrum shows the signature of water molecules, confirming its low temperature. Spectral data and analysis of the gravitational field of the object suggest the 5 Jupiter-mass finding, although the final determination could be somewhat less.

The team’s paper on this work has been accepted by Astronomy & Astrophysics. Another paper from the same team, about which more later, will suggest the imaging of a companion some 13 to 14 times the mass of Jupiter orbiting the star AB Pictoris, some 150 light years from Earth. That places the object on the borderline between brown dwarf and planet, a boundary that will doubtless be the subject of increasing study as more such findings emerge. For more on 2M1207b, see this European Southern Observatory press release.