Robert Forward’s early work on the beamed-energy lightsail, exemplified by the 1984 paper “Round-trip Interstellar Travel Using Laser-Pushed Lightsails,” came to grips with the central challenges of interstellar travel. As described in a recent paper on beamed energy requirements for laser sails, these are: 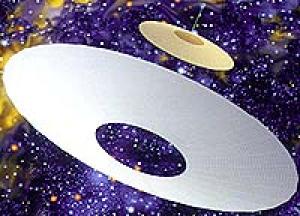 Forward’s methods involved huge laser installations near the Sun, lenses fully 1000-kilometers in diameter in the outer Solar System, and a vast sail constructed in three parts so it could be separated (staged), with the outer ring projecting light back on the inner two for deceleration at destination, using the still powerful laser beam from the Sol system. The method is complicated, ingenious and extraordinarily creative. But can we improve on its physics?

Image: Forward’s lightsail separating at the beginning of its deceleration phase. Laser sailing may be the best way to the stars, provided we can work out the enormous technical challenges of managing the outbound beam. Credit: R.L. Forward.

Recent work on these issues is summarized in “Space Based Energy Beaming Requirements for Interstellar Laser Sailing,” by Travis Taylor, R. Charles Anding, D. Halford and Gregory Matloff. The authors quickly point to a major limitation of laser propulsion: the beam must be aimed precisely and kept tightly collimated (avoiding beam spread) “…to an accuracy defined by a 100-km sail size at the far end of a trillion-kilometer acceleration ‘runway.'”

One method for doing this is Forward’s, constructing an O’Meara para-lens, which is a huge Fresnel lens made of concentric rings of some lightweight, transparent material, with free space between the rings and spars to hold the vast structure together. The lens would be constructed in the outer Solar System between the orbits of Saturn and Uranus. Supplying it would be a laser beam from an installation near Mercury’s orbit, one demanding laser power to the tune of roughly 1000 times our civilization’s current power consumption.

Other possibilities for energy beaming include accelerating micro-sails in the beam; these would impact upon the larger spacecraft, transferring their momentum to it. Matloff has also determined that some sail shapes may be able to automatically correct for small beam drift. And it may be possible in some way to employ gravitational lensing; just as the light from an object occulted by the Sun, when seen from a distance greater than 550 AU from the Sun, is focused into an amplified and narrow beam, perhaps beamed energy from the Earth could be similarly tailored to reproduce this effect.

Other items of interest in this wide-ranging paper include an analysis showing that instead of Forward’s para-lens design, a solid optic might have better optical and structural properties. The authors experiment with a small-scale prototype of an electrically controlled membrane reflector as a proof-of-concept, confirming that curvature produced in the reflector by electrostatic forces made it into a useful antenna.

The huge power requirements of laser sailing will demand large solar collector arrays based in space. In this context, the authors consider the precise control system demands needed to keep the laser beam on the sail at large distances from the Sun. From the paper:

The analysis given here, which did not take into account pointing jitter, suggests a minimum of about 15 km in radius for the collector. If pointing error is considered, it appears that the current state-of-the-art of jitter control is many orders of magnitude from enabling a laser sailing mission. Beam control is the largest obstacle for laser sailing.

Preliminary analysis suggests that the standard O’Meara para-lens would be inefficient and most likely difficult to control or steer. More analysis and experiment should be conducted, however, before the idea is completely discarded. On the other hand, the current status of large reflective optics seems more likely to be technologically feasible in the near future.