The mundane facts of finance continue to threaten our far-flung Voyager spacecraft as NASA looks for dollars to keep the missions alive. Adding further significance to the issue is the upcoming news conference on May 24, in which Voyager scientists will present information that has led them to conclude Voyager 1 has reached the heliosheath — that area between 80 and 100 AU from the Sun just inside the boundaries of the heliosphere.

What tells us that Voyager 1 has entered the heliosheath? On December 17, 2004, at a distance of 94 AU, the spacecraft noted an increase in the strength of the magnetic fields around it; particle beams in the area reversed direction and became steady in strength, markers of the passage. More on this on Tuesday, when we will also hear about “…some puzzling and unexpected aspects of these observations…” and predictions about what comes next. All this takes place within the context of the American Geophysical Union’s 2005 Joint Assembly, which runs from May 23 to 27 in New Orleans.

These findings, of course, are all the more reason we must find a way to sustain funding for the Voyagers. But the NASA budget crunch doesn’t stop here. NASA administrator Michael D. Griffin has sent a letter to Congress noting the agency’s $2 billion shortfall in the current year. Among the undesirable effects of the budget squeeze may be to stretch the timelines of both the Space Interferometry Mission (currently scheduled for 2011 launch) and Terrestrial Planet Finder (2012-2015). 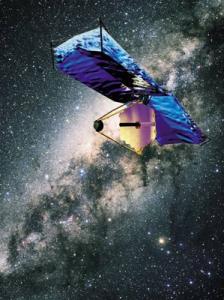 The worst problem of all may be cutbacks and a delay in the launch of the James Webb Space Telescope, a 6.5-meter infrared observatory designed to study the earliest galaxies. The JWST is being jointly developed by NASA, the European Space Agency and the Canadian Space Agency. The delay would set the telescope’s launch back at least to 2012, with possible increases to mission costs also coming into the picture. The Webb telescope’s current budget is $3.5 billion.

According to Sky & Telescope, NASA is now asking the project to consider a scaled-down JWST, perhaps a 4-meter telescope with fewer instruments. It is hard to see how such a minimized telescope could be justified, given the rapid increases in giant ground-based telescopes that could outperform it.

Science Magazine has a news feature on this story: “NASA Astronomy: New Space Telescope May Be Scaled Back,” Science 308 (2005), p. 935. And note this story from the Rocky Mountain News, seen through the eyes of JWST subcontractor Ball Aerospace & Technology. From the story:

“I’d say it is a crisis,” said John Mather, project scientist for the telescope at NASA’s Goddard Space Flight Center in Maryland.

“(NASA) headquarters just doesn’t have any more money for us,” Mather said. “Something’s got to give, but we don’t know what it’s going to be.”

Centauri Dreams‘ note: A panel of astronomers is to meet over the next two months to rank the JWST’s science priorities, but it’s hard to see how cutting deeply into the mission can avoid having a catastrophic effect on this successor to Hubble. Yes, it could still do good science, but its original mission goals (the study of galaxies that first appeared as early as 200 million years after the universe formed) would have to be abandoned because they’re based on the larger instrument. In what may now be seen as an ironic twist, the National Academy of Sciences has ranked the JWST as the most important NASA science project of the decade. Let’s hope it stays that way.