One of the most distant planets ever discovered has been found 15,000 light years from Earth by an international team of astronomers helped by two amateurs from New Zealand. The method of discovery was gravitational microlensing, which occurs when a massive object like a star crosses in front of a star shining in the background. Light from the more distant object is bent and magnified as if by a lens. From astronmers’ perspective here on Earth, the background star gets brighter as the lens crosses in front of it, and then fades as the lens moves away.

Which is what happened on March 17, 2005 when Andrzej Udalski, professor of astronomy at Warsaw University and leader of the Optical Gravitational Lensing Experiment (OGLE) realized that a star he was observing was moving in front of a much more distant star. The brightening of the distant star was significant — almost a hundred-fold — and it was then that OGLE astronomers (and a team from the Microlensing Follow Up Network (MicroFUN) found a new pattern: a distortion in the brightening of the star that indicated a planetary transit. The new world seems to weigh three Jupiter masses and orbits a star similar to the Sun at a distance of three AU. 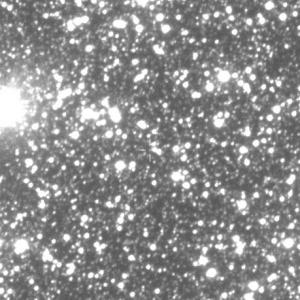 Andrew Gould, professor of astronomy at Ohio State, has no doubt that a planet passed in front of the star, and even more significantly, he believes that the microlensing technique would have worked even on a much smaller world. “If an Earth-mass planet was in the same position, we would have been able to detect it,” Gould said. A paper on the find is available on the arXiv site.

Image (click to enlarge): Astronomers discovered a new planet when it and its host star crossed in front of a very faint background star (marked by crosshairs) and magnified the distant star’s light in a process called gravitational microlensing. Although the newfound planet is 3 times the size of Jupiter, microlensing offers the possibility of detecting earth-sized worlds using existing technologies. Credit: Optical Gravitational Lensing Experiment.

In late May, the team will study the new planetary system with the Hubble Space Telescope. With OGLE’s dedicated installation at Las Campanas Observatory in Chile teaming with the MicroFUN collaboration of astronomers from the US, Korea, New Zealand, and Israel, microlensing events can be tracked around the clock (OGLE finds more than 600 of these a year — not all, obviously, lead to planets). The two New Zealand amateurs — Grant Christie of Auckland (14-inch telescope) and Jennie McCormick of Pakuranga (10-inch telescope) share authorship on the arXiv paper, which has been submitted to Astrophysical Journal Letters. Both are part of the MicroFUN network.

This is the second discovery of a planet using microlensing, the first having occured in 2004 in a star system some 17,000 light years away in the constellation Sagittarius. For more on that discovery, see this JPL news release.