Voyager at the Edge

NASA is now confirming that Voyager 1 has entered the heliosheath, where the solar wind and interstellar materials begin to mix. The heliosheath is the outermost layer of the heliosphere, beyond which the spacecraft passes into interstellar space. Among the confirmatory data noted by the Voyager team: the magnetic field carried by the solar wind has increased by a factor of two and a half, which is the natural result of the solar wind slowing down. These readings have remained high ever since mid-December 2004, when the spacecraft crossed the termination shock at 94 AU. The issue, controversial ever since, now seems resolved.

“The consensus of the team now is that Voyager 1, at 8.7 billion miles from the Sun, has at last entered the heliosheath, the region beyond the
termination shock,” said Dr. John Richardson from MIT, Principal Investigator of the Voyager plasma science investigation.

Analogies are always useful in explaining such matters, and NASA offers the following in relation to the termination shock, that region where the solar wind is slowed by pressure from interstellar gases. “Consider a highway with moderate traffic. If something makes the drivers slow down, say a puddle of water, the cars pile up – their density increases. In the same way, the density (intensity) of the magnetic field carried by the solar wind will increase if the solar wind slows down.” Hence the observed increase in magnetic field strength. For more, see this NASA story.

And from a University of Iowa press release:

“The solar wind creates a bubble (the heliosphere) around the sun, and near the edges of the bubble is a place where the solar wind piles up as it encounters the interstellar wind,” says Ed Stone, Voyager project chief scientist and professor of physics at the California Institute of Technology. “We think the sun is currently in a phase where the heliosphere is shrinking. If so, Voyager would continue to be in this thicker and hotter region until it reaches the heliopause, the outer edge of the bubble. This is a wonderful opportunity to reach interstellar space, and we hope we can keep the spacecraft operating through the year 2020.”

Also from the University of Iowa come thoughts on how far Voyager has to go before encountering true interstellar space. Iowa physics professor Don Gurnett, principal investigator for the plasma wave instrument on Voyager 1, estimates the craft to be 25 to 35 AU from interstellar space. That would require another ten years for the transit, a time frame still within range for Voyager’s instruments. Both vehicles are expected to keep sending good science until at least 2020, using onboard radioisotope thermoelectric generators for power. We have, in other words, fifteen years of data ahead of us, provided NASA can find the funds to keep receiving this precious information. 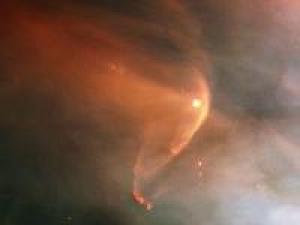 Fascinating sounds of Voyager’s encounter with the termination shock can be heard at Gurnett’s Web site. And ponder the image at the left. This is a Hubble photograph showing a bow shock about half a light-year across. It was created by the solar wind from the star LL Orionis as it collided with the flow of gases from the Orion Nebula. Interstellar space is, in many ways, anything but empty, something we’ll have to bear in mind when we get to the point where we’re building probes that move at an appreciable fraction of light speed. More on this tomorrow, when we discuss interstellar shielding in this environment in relation to a recent paper by Dana G. Andrews.