On Shielding a Starship

Just how empty is interstellar space? We know that atoms of hydrogen and helium are the primary elements found there, but widely scattered atoms of every other element also show up in greater or lesser densities, along with grains of dust that are pushed into deep space by the pressure of stellar winds. You can also figure on cosmic rays — ionized atoms accelerated to extremely high energy states. So energetic are galactic cosmic rays that they correspond to the energy of protons moving anywhere from 43 to 99.6 percent of the speed of light. And let’s not forget magnetic fields — a weak interstellar field aligns with our galaxy — and high-energy gamma rays that emerge from stellar events that are still poorly understood.

Granted, the density of material in the nearby interstellar medium is far lower than the best vacuums we can create on Earth. The average in the Sun’s vicinity seems to be .01 atoms of hydrogen for every cubic centimeter of space, a number that is lower than the galactic average. As for dust, expect one dust particle for every trillion atoms. Even so, probes moving at 20 to 30 percent of light speed have to reckon with the effect even a single particle could have on the spacecraft. Dana G. Andrews (Andrews Space, Seattle) has made a recent study of these issues as they apply to a manned interstellar mission in a paper called “Things to Do While Coasting Through Interstellar Space.”

Here is Andrews discussing the nature of the problem, as it presents itself to a hypothetical starhip carrying four passengers on a thirty year trip crossing ten light years:

For a spacecraft traveling at 0.3c…even small grains of dust behave like very energetic cosmic rays as we collide with them. For instance, a relatively abundant carbonaceous dust grain 1/10 of a micron in diameter will have a relative kinetic energy of 37,500,000 GeV, and our interstellar craft should impact just over 13 of this size dust particles per second over every square meter of frontal area. Obiously, stopping or redirecting these dust particles is a major design goal. 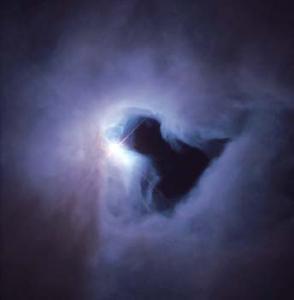 How to deal with cosmic rays and dust particles? They can either be absorbed or redirected. Protecting the vehicle through absorption might mean packaging it like an onion, with the crew in the center of a layered craft made up of concentric rings of supplies and equipment. Andrews sees the top level as primarily machinery and storage, the middle deck as living area, and the bottom level as the Closed Environment Life Support System, the entire structure connected to the stowed accelerating sail by long cables. The entire assembly would be rotated so as to provide 1 g of acceleration. He sees the outer shell of the craft as 25 cm of multiple layers of polyamides, metal foils and polyethylenes to provide a degree of radiation protection.

Image: A Hubble image of NGC 1999, a nebula in the constellation Orion. Here a region of dusty gas surrounds a star and reflects its light. Depending on your destination, the interstellar medium is anything but empty. Hubble’s Wide Field Planetary Camera 2 (WFPC2) was used to obtain the color image. Credit: NASA and The Hubble Heritage Team (STScI).

Cosmic ray radiation, with its large kinetic energies, is quite penetrating. To protect his crew, Andrews uses plastics with high hydrogen content, saying “…since 99% of the Galactic Cosmic Radiation is ionized hydrogen or helium, it’s obvious why hydrogen makes the best shielding (because like masses scatter better).” Hull shielding is combined with internal shielding of the crew’s sleeping quarters with 30 gm/cm2 of water storage, which reduces the annual radiation dose to about three times the recommended yearly dose for radiation workers in the USA, within the overall guidelines for astronauts.

Two other options for shielding come into play: magnetic shielding would use large current loops of superconducting wire to create a magnetic dipole field around the habitat (the habitat, in turn, would be protected inside a Faraday Cage, which acts as an electromagnetic shield). Entering this dipole field, cosmic rays would be reflected or deflected around the habitat. Magnetic shielding is heavier than hull shielding but the difference in living space in Andrews’ design allows for a much larger crew (in fact, the habitable volume jumps to twenty times what was found in the first design). Finally, multiple layers of foil ‘bumpers’ can be used as debris shielding that would ensure that incoming dust particles can be broken down to atoms and ionized, thus making them capable of being deflected by the magnetic field.

Andrews believes that power can be extracted from the dust particle annihilation. But is it possible to harvest some of the interstellar material for use aboard the vessel? Some form of resource collection may be possible, but Andrews doubts its effectiveness:

It should…be possible to seal the cylinder gas tight, set the voltage to completely stop atoms with predetermined energies, so that they don’t penetrate the upper foil, but instead are neutralized, and collected. This is in situ resource collection. Unfortunately, the mass density in interstellar space is too low to make in situ resource scavenging worthwhile. The total amount of silicates dust impacting the debris bumper foils over the ten light-year journey amounts to 38 grams. Likewise the carbonaceous dust impacting over ten light-years totals 13 grams. Better we carry all our provisions with us.

As humanity moves out beyond the Solar System, then, enabling technologies for our first interstellar voyages will include magnetic shielding and the ability to ionize dust particles to ensure adequate deflection. All contingent, of course, upon steep reductions in the cost of power in deep space and, if we are hoping for human crews, advances in life support and long-term equipment maintenance. These seem achievable goals whose technologies can be developed right here in the Solar System, and Andrews is sanguine about their resolution, saying “…there appears to be nothing in physics to prevent interstellar travel by humans.”

The paper is D. Andrews, “Things To Do While Coasting Through Interstellar Space,” AIAA-2004-3706, 40th AIAA/ASME/SAE/ASEE Joint Propulsion Conference and Exhibit, Fort Lauderdale, Florida, July 11-14, 2004. On interstellar shielding, also be aware of the classic paper by A.R. Martin, “Bombardment by Interstellar Material and Its Effects on the Vehicle,” Project Daedalus Final Report (Journal of the British Interplanetary Society, 1978): S116–S121.