We’re a little over a day from the Cosmos 1 solar sail launch, testing the technologies that may one day make travel within the inner Solar System faster and far more efficient. Centauri Dreams has discussed the involvement of Ann Druyan’s Cosmos Studios; the documentary film and entertainment company put $4 million into the project, which is led by The Planetary Society. But it’s also important to acknowledge the major Russian contribution, and not just in the Volna rocket that will launch the satellite, or the Russian submarine from which it will be fired.

No, the Russian involvement is deeper still: the space firm NPO Lavochkin is behind much of the design of Cosmos 1, and the Russian Academy of Science’s Space Research Institute is a major player. All told, Cosmos 1 is a case of trans-national collaboration, a fact emphasized by the scattering of team members around the globe as the launch approaches. The Planetary Society’s Viktor Kerzhanovich is now in the Marshall Islands, setting up a temporary ground station; another ground station is in Petropavlovsk, on the Kamchatka peninsula. Both are needed because in its early orbits, the sail will not pass over the permanent ground stations set up around the globe, from Berkeley to the Czech Republic. 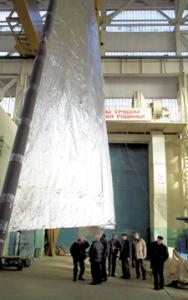 Emily Lakdawalla’s weblog continues to follow all this, and so, of course, does the press, with stories all over the Sunday papers, such as this one from The Washington Post or this feature in the Christian Science Monitor. Some stories focused on future uses of the sail, including the possibility of interstellar travel through beamed laser propulsion, while others stayed closer to home, noting the sail’s utility in keeping satellites in orbits that would otherwise be unstable, such as ‘polesitter’ orbits for communications, or early warning solar flare missions on satellites operating closer to the Sun than would otherwise be possible.

Image: Engineers watch a zero-gravity simulation of the sail deployment and test its mechanical configuration. This photo was taken in January 2001 at NPO Lavochkin, the world’s largest manufacturer of robotic spacecraft. Credit: Louis Friedman, The Planetary Society (c).

The approaching launch triggers the memory of that May 1951 issue of Astounding Science Fiction in which engineer Carl Wiley wrote a non-fiction article called “Clipper Ships of Space.” The idea of photon propulsion goes back as far as Kepler and traces out a distinguished history down through James Clerk Maxwell, who predicted the pressure exerted by light in 1864, and the Russian Peter Lebedev, who was the first to demonstrate that pressure in a laboratory. Wiley’s article was the first detailed account of using sails for space travel, and he evidently felt insecure enough about both idea and venue that he wrote under the pseudonym ‘Russell Saunders.’

One can imagine what Wiley would have thought about Cosmos 1, but the idea of solar sailing has had fifty years since his day to be refined through countless studies in the professional journals of astronautics. Now we find out whether all the advance work pays off. Cosmos 1, according to this Planetary Society backgrounder, will deploy its sails several days into the mission, at a time that it is within range of the two Moscow-area tracking stations. Deployment is tricky and represents one of the major challenges of solar sail work, but if this process succeeds, the ground team will then begin shifting the blades’ angles toward the Sun in an attempt to gain orbital energy.

Speed is essential, because the mylar sails will degrade within a month’s time. But assuming all goes well, a milestone in solar sail development will have occurred — a free-flying solar sail will be operational. Yes, we’ve measured photon pressure before on missions as far back as Mariner 10, and the orbits of communications satellites have to take the pressure of photons into account. But we’ve never before had a spacecraft designed from scratch around these principles.

Perhaps just as remarkable is the private nature of the mission, surely a harbinger of things to come from non-governmental sources in what seems to be the early stages of a commercial space boom.