How can a planetary disk form in a region as chaotic as the Orion Nebula? Ponder the disruptive force of stellar winds in the range of two million miles per hour and temperatures above 18,000 degrees Fahrenheit. The assumption would naturally be that until a place like this settles down, material trying to form into a new solar system would simply be scattered into space.

Not so, according to new findings from the Submillimeter Array (SMA), a telescope on Mauna Kea which works at millimeter and submillimeter wavelengths, and can therefore study interstellar material like gas, dust and small rocks the likes of which ultimately form planetary systems. SMA actually sees into dense interstellar clouds to examine the birthing process of stars. 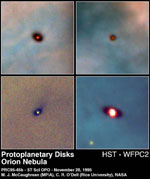 What the array has found is that protoplanetary disks are more tenacious than first thought. In fact, many of the objects called “proplyds” — first seen by Hubble in the 1990s as silhouettes on the nebular background — already have clustered sufficient material to form new planetary systems of their own. The area in question is called the Trapezium, a star cluster consisting of more than 1,000 young, hot stars crowded into a space about four light-years in diameter. If that number rings a bell, it’s roughly the distance between the Sun and the Alpha Centauri triple-star system.

Image: These are Hubble Space Telescope images of four newly discovered protoplanetary disks around young stars in the Orion nebula, located 1,500 light-years away. The red glow in the center of each disk is a young, newly formed star, roughly one million years old. Each image is 167 billion miles across (30 times the diameter of our own solar system). The disks range in size from two to eight times the diameter of our solar system. Credit: M. McCaughrean (Max Planck Institute for Astronomy), C.R. O’Dell (Rice University), and NASA.

Intriguingly, some of the disks found in this region seem comparable in mass and size to our own Solar System, strengthening the case that what we are witnessing is a relatively normal route to the formation of planetary systems. Most Sun-like stars are thought to have formed in environments much like the Orion Nebula. “The same cycle of birth, life and death we experience here on Earth is repeated in the stars overhead,” said David Wilner, of the Harvard-Smithsonian Center for Astrophysics (CfA).

The work was presented last week at a meeting in Cambridge, MA. A news release from the CfA provides additional background.