An unseen planet is the cause of the unusual geometry of a dusty ring around the star Fomalhaut (HD 216956). So say University of California at Berkeley scientists after examining a detailed, visible light image from the Hubble Space Telescope’s Advanced Camera for Surveys. What’s striking about the image isn’t the ring itself, but the fact that it seems to be offset, evidently the result of the hidden planet reshaping the ring with its gravitational pull.

The suspected planet is thought to be orbiting far away from Fomalhaut, along the ring’s inner edge, making it anywhere from 4.7 billion to 6.5 billion miles away from the star. What the Hubble observations show is that the ring’s inner edge is much sharper than its outer one, a sign that the ring is being gravitationally shaped by the unseen body. Another key pointer: the ring’s unusually narrow width, some 2.3 billion miles. It would be much more diffuse without an object keeping it confined. 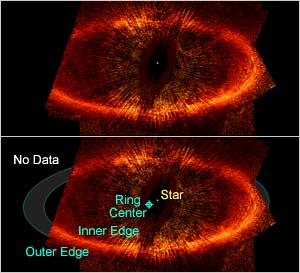 Image: The top view, taken by NASA’s Hubble Space Telescope, is the first visible-light image of a dust ring around the nearby, bright young star Fomalhaut. The view at bottom points out important features in the image, such as the ring’s inner and outer edges. In order to image the faint ring, a coronagraph on Hubble’s Advanced Camera for Surveys was used to eclipse the bright star, the position of which is indicated by a dot near the ring’s center. The center of the ring is about 1.4 billion miles away from the star. Astronomers believe that an unseen planet moving in an elliptical orbit is reshaping the ring. (Photos courtesy NASA, ESA, P. Kalas and J. Graham [University of California, Berkeley], and M. Clampin [NASA’s Goddard Space Flight Center]).

The ring itself shows some similarity to the outer regions of our own Solar System. “Our new images confirm those earlier hypotheses that proposed a planet was perturbing the ring,” said astronomer Paul Kalas of the University of California at Berkeley. “The ring is similar to our Solar System’s Kuiper Belt, a vast reservoir of icy material left over from the formation of our Solar System planets.”

But the similarities end there. Fomalhaut, some 25 light years from the Sun in the constellation Piscis Austrinus (the Southern Fish) is quite young, only 200 million years old; it is twice the mass of the Sun. The diameter of its debris ring is four times greater than that of the Kuiper Belt. The Fomalhaut ring is, nonetheless, considerably older than the debris disks previously found around the stars AU Microscopii and Beta Pictoris, where planets are probably still in formation. Kalas again:

“The size of Fomalhaut’s dust ring suggests not all planetary systems form and evolve in the same way — planetary architectures can be quite different from star to star. While Fomalhaut’s ring is analogous to the Kuiper Belt, its diameter is four times greater.”

Go back to 200 million years after the formation of our Solar System and the planets had already appeared, but were still clearing out the larger debris of small planetary bodies — asteroids and comets — that littered their orbits. It was a time of bombardment, forming craters like those seen on the Moon today. The Kuiper Belt seems to be made up of material left over from that period.

A nice simulation of the dust belt around Fomalhaut and the still unseen planet that shapes it can be found here. Kalas and collaborators James R. Graham, professor of astronomy at UC Berkeley, and Mark Clampin of the NASA Goddard Space Flight Center in Greenbelt, Md., will publish their findings in the June 23, 2005, issue of the journal Nature.