Getting Ready for Deep Impact

What can you do with a vertical gun range? NASA’s Ames Research Center has one, a three story tall machine that fires objects into the surface of your choice. Of late, Brown University professor of geology Peter Schultz has been using it to fire marble-sized beads into surfaces ranging from dust to ice and snow. Moving faster than a speeding bullet — ten times as fast — the objects create craters, and craters are something Schultz has made a career studying.

As you might imagine, this expertise has caught NASA’s eye, and the agency hopes to use Schultz’ work to analyze the results of the fireworks set to go off on July 4, when comet Tempel 1 runs headlong into the Deep Impact probe. The professor is one of 13 co-investigators overseeing the mission, which is designed to study what comes out of the comet when the spacecraft’s 820-pound copper impactor separates from the mothership and becomes a cometary target. From a Brown University news release:

“This is heady stuff,” Schultz said. “The ice inside comets has been in the deep freeze since the creation of the solar system. Now we are finally going to see what this stuff looks like and what it is made of. This is important information. Comets may have been the messengers that carried the ingredients of life to Earth.” 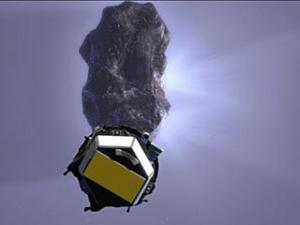 Schultz’ work at the Ames Vertical Gun Range has recorded countless variations on the trajectory of flying debris, crater size and other variables. On July 4, cameras on the main Deep Impact probe will see how accurate all that advance work was as they record the collision and relay data that may be helpful in determining the inner composition of the comet. Several space telescopes, including Hubble, Spitzer and Chandra, will also be observing the event, along with a number of Earth-bound observatories.

Without a firm knowledge of cometary crusts — their thickness and density — we can’t exactly predict what will happen to Tempel 1, but chances are the collision will produce something unexpected. “We expect to be surprised,” said University of Arizona Regents Professor H. Jay Melosh, a member of the Deep Impact science team. “We don’t know what the comet’s surface is like. We could hit something as hard as concrete or as soft as cornflakes.”

Tempel 1, now in the constellation Virgo, is about forty times dimmer than can be seen with the naked eye, but it is conceivable that the comet will brighten enough to be seen through binoculars after the impact. No one is quite sure how long such brightening might take, however, or even if it will occur.

And one comforting note: no matter what the impactor does to Tempel 1, there is no chance of sending it careening toward Earth. Melosh says the chances of that are about the same as that of a gnat changing the flight path of a fully loaded Boeing 747. You can read more of Melosh’s comments, and see a breakdown of the observatories that will be tracking Deep Impact, in this University of Arizona posting. The Deep Impact site, soon to be knee-deep in traffic, is here. And be aware of these two animations by Dan Maas describing the mission.