If you want to see planet building happening before your eyes, turn your attention to TW Hydrae. Located 180 light years from the Sun in the constellation Hydra (the water snake), TW Hydrae is ten million years old, a celestial infant, with a mass four-fifths that of the Sun. Now researchers have discovered that the protoplanetary disk surrounding it contains more than enough material to form at least one and probably more Jupiter sized planets. 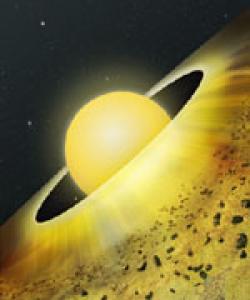 Behind the new study are David Wilner (Harvard-Smithsonian Center for Astrophysics) and colleagues, whose work was just published in the June 20, 2005, issue of The Astrophysical Journal Letters. The team has shown that a vast swarm of pebbles extending out a billion miles from the star is in the early stages of planet formation. The small objects, according to current models, should grow in size as they continue to collide and eventually form planets. “We’re seeing planet building happening right before our eyes,” said Wilner. “The foundation has been laid and now the building materials are coming together to make a new solar system.”

To measure the size of the disk, the scientists used the National Science Foundation’s Very Large Array to measure radio emissions from TW Hydrae. The radiation showed a cold, extended dust disk filled with centimeter-sized pebbles. Dusty disks like this one emit radio waves with wavelengths similar to the size of the particles in the disk, an unusually useful fact that in this case was amplified not only by the relative closeness of the system, but also by the current stage of the young star’s evolution, which allows the particle size/wavelength relationship to be readily observable.

But is there already a planet in the TW Hydrae system? A colleague of Wilner’s at the CfA, Nuria Calvet, has created a computer simulation of the disk, demonstrating a gap from the surface of the star out roughly 400 million miles, about the distance between the Sun and the asteroid belt in our own Solar System. Chances are the gap is the result of a giant planet pulling in nearby material, though the planet itself has yet to be observed.