Getting an interstellar probe to its target involves navigation of a high order. ‘Marker’ stars — stars that are both bright and distant enough to have relatively fixed positions for the duration of the journey — often show up in the scientific literature. Thus Rigel and Antares, both of which are far larger than the Sun, are attractive markers. Rigel (Beta Orionis) is some 800 light years distant, while Antares (Alpha Scorpii) is over 500 light years away. Are there other, better kinds of markers?

Perhaps so, according to the European Space agency. ESA, through its Ariadna initiative, is homing in on using pulsars for navigation. Ariadna operates under ESA’s Advanced Concepts Team to study new space technologies through linkages with the European academic community; it’s a way to strengthen the agency’s ties with independent researchers. As in the US, creating such connections is tricky business, but Ariadna is already doing interesting work, as its new study on pulsars suggests. 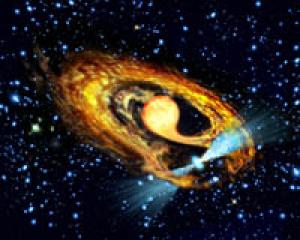 To be precise, the study, called “Feasibility study for a spacecraft navigation system relying on pulsar timing information,” relies on so-called ‘millisecond pulsars,’ those that spin at high rates of more than 40 revolutions per second. The beauty of millisecond pulsars is that they are old and quite regular in their rotation, so much so that their pulses can be used as extraordinarily accurate timing mechanisms. The fastest known millisecond pulsar is PSR 1937+211, which completes 642 revolutions every second.

Image: An artist’s impression of the millisecond pulsar PSR J1740-5340 (spinning at 274 times per second) and its companion star. The absorption of matter from an elderly red giant seems to have revitalized the spin rate of the pulsar, while its companion is being emptied of matter and turned into a white dwarf. Credit: European Space Agency.

We need to use marker objects because Earth-based navigation gets problematic for deep space probes. For one thing, when the Sun moves between Earth and the probe, no communication is possible. For another, navigation from Earth is feasible only along the line of sight to the craft. The kind of autonomous navigation systems that could avoid these issues would require a precisely understood natural reference frame, one that can be accomplished by millisecond pulsars. Autonomous systems developed to use such markers will be what we use on our first robotic probes to other star systems.

The trick, as the Ariadna report makes clear, will be to balance spacecraft mass and power constraints against the navigation hardware that will be developed. Pulsar signals may have an exquisite sense of timing, but they’re also very faint compared to conventional radio tracking signals. The study discusses suitable pulsar sources and derives the minimal hardware configurations that can be used to create such a positioning system. A possible catch: using several pulsar sources with different antennae seems necessary for the best accuracy, but this requires heavy hardware.

J. Sala, A. Urruela, X. Villares, et al., “Feasibility study for a spacecraft navigation system relying on pulsar timing information” has been available on the Net but seems to have been taken down. Until it’s back online, a mission analysis study of pulsar navigation (with link to the online file) can be found here. A backgrounder on Ariadna from ESA’s Advanced Concepts Team is also available. We’ll have much more to say about ACT and other advanced work there in coming days.