How unlikely would it be to find a 200-year old person? That’s the comparison astronomer Lee Hartmann (Harvard-Smithsonian Center for Astrophysics) is using in talking about a dust disk around a pair of red dwarf stars. The disk looks conventional enough — as examined by the Spitzer Space Telescope, its inner edge is about 65 million miles from the binary stars, and it seems to extend outward for 650 million miles. That kind of disk should lead, according to current theory, to planetary formation within a few million years. 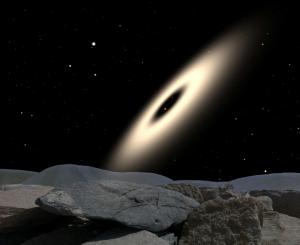 But the disk in question has been estimated to be 25 million years old, and it shows no evidence whatsoever of having created a planetary system. In fact, a dust disk that old shouldn’t exist at all; most newborn stars show no dust disks after just a few million years. All that material has by that time gone into the making of full-sized planets.

Image: Astronomers were surprised to discover a 25-million-year-old protoplanetary disk around a pair of red dwarf stars 350 light-years away. Gravitational stirring by the binary star system (shown in this artist’s conception) may have prevented planet formation. Credit: David A. Aguilar (CfA).

And that makes these two red dwarfs, located some 350 light years away in the constellation Taurus, a mystery. “We don’t know why this disk has lasted so long, because we don’t know what makes the planetary formation process start,” said Nuria Calvet of CfA, a co-author on the paper announcing the discovery.

Can these stars still form planets? The jury is out, and we can expect strenuous debate, along with a renewed search to discover how common such old disks are. The paper discussing the long-lived protoplanetary disk will be published in the Astrophysical Journal Letters. A Harvard-Smithsonian Center for Astrophysics news release is here.