Terrestrial Worlds in the Making?

So many of the planets discovered in the last ten years have been gas giants, circling their parent stars in extremely tight orbits. We assume there are rocky, terrestrial worlds out there in abundance, but until more advanced detection techniques are in place, how can we be sure? An important answer may be offered by BD +20 307, a Sun-like star some 300 light years from our Solar System. It’s surrounded by a warm disk of silicate dust particles that shows all the signs of being formed from the collision of rocky bodies up to planet size.

Located in the constellation Aries, the star has one more ace up its sleeve. Its dust — found in greater profusion than has ever been observed around a Sun-like star this long after its formation — exists at distances comparable to that of the Earth from the Sun. Finding such an infrared dust signature at Earth-like distances (i.e., 1 AU) has long been a goal of researchers. As revealed in the July 21 issue of the British science journal Nature, the finding seems to corroborate theories of how our own Solar System formed, and implies that rocky planets and their moons are not necessarily rare. 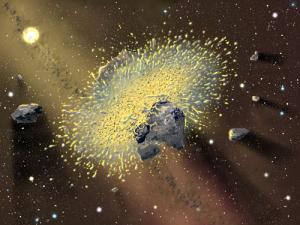 “The amount of warm dust near BD+20 307 is so unprecedented I wouldn’t be surprised if it was the result of a massive collision between planet-size objects, for example, a collision like the one which many scientists believe
formed Earth’s moon,” said Benjamin Zuckerman, UCLA professor of physics and astronomy, member of NASA’s Astrobiology Institute, and a co-author on the paper. Zuckerman is quoted in a Gemini Observatory (Hawaii) press release; the observations behind this work were taken at the Gemini and W.M. Keck Observatories.

Image: Artist’s conception of a possible collision around BD +20 307 that might have created some of the dust observed in the recent Gemini/ Keck observations. The collisions responsible for this dust could range in size from the largest known asteroids (approximated here) to planets the size of the Earth or Mars. Credit: Gemini Observatory/Jon Lomberg.

Here’s what we know about BD+20 307: it’s slightly more massive than the Sun, and its dust disk was first detected by the Infared Astronomical Satellite in 1983. The star, otherwise unobserved since the 1983 findings, is estimated to be 300 million years old, implying that any large planets orbiting it have already formed. But large outer planets might have a formative effect on the rocky debris in the inner system, as evidently happened near our Sun.

What the new work shows is that the collisions that would account for the observed dust must have been between bodies as large as 300 kilometers across, roughly the size of the largest asteroids, and could have involved much larger objects up to planetary size. “Whatever massive collision ocurred, it managed to totally pulverize a lot of rock,” said team member Alycia Weinberger.

The amount of dust around BD+20 307 is remarkable, fully one million times greater than the dust remaining around our Sun today. And here’s something fascinating. Because of its properties, the team estimates that the collisions forming the dust could not have occurred more than about 1000 years ago. A longer period than that would give the dust enough time to fall into the star. So we’re dealing with what seems like one or a series of recent collisions within an Earth-like distance from the star, just the zone in which we believe a major collision produced our own Moon. BD+20 307 may well be evolving into a planetary system with marked similarities to our own.

Centauri Dreams‘ take: We’ve found dust around numerous Sun-like stars, but it tends to be cold and orbits far from its parent star, in regions analogous to the Kuiper Belt around the Sun. Only a few main-sequence stars show signs of warm dust disks, making the signature of planet formation in the ‘habitable zone’ areas roughly 1 AU from a star very hard to examine. BD+20 307 is therefore an outstanding find that will provide clues on what to look for as we extend the search for terrestrial worlds to thousands of nearby stars.

And listen to Inseok Song, a former UCLA research scientist who is now an astronomer with the Gemini Observatory in Hawaii, and lead author of the paper:

“Since the early ’80s,” Song said, “many astronomers have eagerly searched for an analogy to our solar system’s asteroidal belt at other stars. Our finding is a bona fide example of dust at the exo-asteroidal zone and it is chilling to see dust at the Earth-sun separation around a young solar analog — like seeing our own sun back in time.”

The paper is Inseok Song, B. Zuckerman, Alycia J. Weinberger and E. E. Becklin, “Extreme collisions between planetesimals as the origin of warm dust around a Sun-like star,” Nature 436, pp. 363-365 (21 July 2005). A UCLA news release on this work can be found here.