Lighting Up the Solar Wind

Tracking down the history of a star is no easy matter, but a supernova called SN 1979C is providing unexpected assistance. Just as researchers can study ancient climates by examining the concentric rings inside a tree, astronomers using the European Space Agency’s XMM-Newton space observatory have found a way to study the rings around a star. SN 1979C, it turns out, produced huge stellar winds late in its life that flung particles into space over a period of millions of years. The result: a series of concentric rings lit up by x-rays when the star exploded. 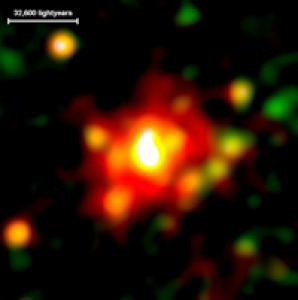 “We can use the X-ray light from SN 1979C as a ‘time machine’ to study the life of a dead star long before it exploded,” says Dr Stefan Immler, leader of the team, from NASA’s Goddard Space Flight Center, USA. “All the important information that usually fades away in a couple of months is still there.”

Immler and colleagues have found they can study the star’s stellar wind back to a time fully 16,000 years before the supernova explosion that took its life. What happened at SN 1979C is that the star, some 18 times more massive than the Sun, produced x-rays when the supernova shock heated the rings of stellar wind material to a temperature of several million degrees. The x-ray light illuminates the life of the star before it exploded, providing scientists with 25 years of data to work with not only in x-rays but in wavelengths ranging from radio waves to optical/ultraviolet.

How could a supernova continue shining so brightly in x-ray light? Normally, an object like this fades quickly — the usual pattern is for a supernova to be half as bright after ten days and to fade steadily after that in all wavelengths. But this star, while it has faded dramatically in optical light, is still the brightest x-ray object in its host galaxy (M100, in the constellation Coma Berenices).

One theory is that the stellar wind was so abundant around SN 1979C that it provided the needed material to keep the object glowing in these wavelengths. Compared to our Sun, the star’s circumstellar material is dense indeed. It covers a region 25 times larger than our Solar System, with a density of some 10,000 atoms per cubic centimeter (about 1000 times denser than Sol’s solar wind).

The paper is Immler, S., Fesen, Robert, Schuyler, D. Van Dyk et al., “Late-time X-Ray, UV and Optical Monitoring of Supernova 1979C,” available as a preprint on the arXiv site, and slated to appear in the 10 October issue of the Astrophysical Journal (ApJ 10 October 2005, v632 1).