The Hunt for ‘Hot Earths’

By now we all know what a ‘hot Jupiter’ is — a gas giant orbiting breathtakingly close to its parent star. The radial velocity searches for extrasolar planets that have found so many new worlds are particularly sensitive to high-mass planets in close orbits, so it makes sense that the early list of discoveries would be populated mostly with hot Jupiters. It’s intriguing (and typical of the entire field of extrasolar planet detection) that this is a category of planet few scientists expected to find, especially in such numbers.

In 2004, a team led by Portuguese researcher Nuno Santos discovered a planet 14 times the size of Earth orbiting the star mu Arae, and a later detection by Barbara McArthur and colleagues (University of Texas at Austin) found what may be a rocky world 18 times larger than Earth around the star 55 Cancri. The numbers, in other words, are decreasing as we find smaller and smaller worlds. The 2005 finding of a planet a mere 7.5 times the mass of Earth around the red dwarf Gliese 876 marked the smallest extrasolar planet yet detected (this work was led by Jack Lissauer at NASA Ames and Eugenio Rivera at Lick Observatory).

Thus we have a new category of planet that some are already calling ‘hot Earths.’ The Gliese 876 planet, for example, orbits its star in just 1.94 days, and is roughly a tenth of the distance from it that Mercury is from our Sun.

A new paper by Joshua Pepper (Ohio State) and B. Scott Gaudi (Harvard-Smithsonian Center for Astrophysics) suggests we can do better still. The authors believe that intensive monitoring using current technology could uncover close-in planets down to Earth-like mass. From the paper: “…we conclude it should be possible – from the ground and with current technology – to place interesting constraints on the frequency of Hot Earths and Hot Neptunes in Galactic open clusters. This will in turn constrain the properties of the low-mass planets recently detected in RV [radial velocity] surveys, as well as theories of planet formation and migration in general.” 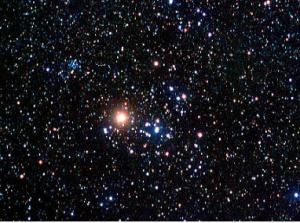 An open cluster is a small collection of stars that probably formed at the same time (think the Pleiades, for example, or the Hyades, both in the constellation Taurus). Not to be confused with globular clusters, which are found throughout the galactic halo, open clusters tend to line up with the galactic plane. Pepper and Gaudi note that despite a number of surveys, no planets have been found around stars in open clusters. But if hot Earths and hot Neptunes are more common than hot Jupiters, transit surveys of such clusters may well yield planets.

Image: The Hyades star cluster, the nearest open cluster to our Solar System at a distance of some 150 light years. The large red star, not a member of the cluster, is Aldebaran. Open clusters may prove the best places to look for Earth-mass planets in close orbits. Credit: Sobolev Astronomical Institute, St. Petersburg.

Transit surveys are tricky; they rely on a planet being lined up so that, as seen from Earth, it passes directly in front of its parent star. Only ten percent of close-in planets make such transits, and only two planets originally found through radial velocity methods have been found to make transits, although deep field surveys of galactic disk stars have found others. But transits offer priceless information about a planet’s radius and are thus a priority. Pepper and Gaudi think that transit surveys of open clusters like the Hyades would be able to detect hot Earths with radii as small as the Earth and orbital periods of between one and four days.

Centauri Dreams‘ note: While not listing them in this paper, the authors point out that surveys of open clusters offer advantages over deep field surveys. They are thus suggesting that for smaller worlds, open clusters are a much likelier hunting ground, even though the number of stars being surveyed is much smaller. The paper, which has been submitted to Astrophysical Journal Letters, is “Detecting Transiting Hot Earths and Hot Neptunes in Galactic Open Clusters, now available at the arXiv site.