No body in the solar system is as reflective as Saturn’s moon Enceladus. Its terrain also appears relatively young, with the early Cassini flybys revealing regions that are only lightly cratered. It seems that Enceladus has undergone a number of episodes of geologic convulsion, with the southernmost latitudes seeing the most recent activity, producing a tortured surface marked by crisscrossing faults, folds and ridges. All this comes from findings revealed by the July 14 Enceladus flyby and discussed recently in a news release from the Cassini Imaging Central Laboratory for Operations. 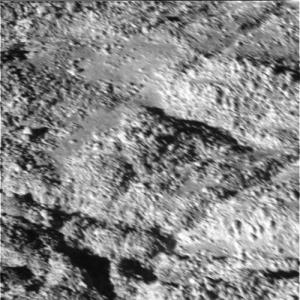 The latest flyby brought Cassini within 175 kilometers (109 miles) of the moon, showing that the landscape near its south pole is studded with ice boulders the size of houses, while impact craters in the region are almost entirely absent. Some of the ice blocks are up to 100 meters (328 feet) across, and they appear in an area that lacks the fine-grained frost found elsewhere on Enceladus. All that adds up to yet another Enceladus surprise.

Image: The tortured southern polar terrain of Enceladus appears strewn with great boulders of ice in this fantastic view, one of the highest resolution images obtained so far by Cassini of any world. Credit: NASA/JPL/Space Science Institute.

“A landscape littered with building-sized blocks was not expected,” said Dr. Peter Thomas, an imaging team member from Cornell University, Ithaca, N.Y. “The minimal cover of finer material and the preservation of small, crossing fracture patterns in the surrounding areas indicate that this region is young compared to the rest of Enceladus.”

If the south pole region is indeed younger than the rest of the moon, then material from Enceladus may be implicated, as some scientists have argued, in the formation of Saturn’s extensive E ring, which coincides with the moon’s orbit. Enceladus is considered too small to generate the heat needed to make major modifications to its surface. But the latest images show a Y-shaped tectonic feature made from parallel ridges and valleys, perhaps evidence of a shift in the moon’s spin rate. Such a shift could be a source for Enceladus’ energetic geology.

“These tectonic features define a boundary that isolates the young, south polar terrains from older terrains on Enceladus,” noted Dr. Paul Helfenstein, an associate of the Imaging Team also at Cornell University. “Their placement and orientation may tell us a very interesting story about the way the rotation of Enceladus has evolved over time and what might have provided the energy to power the geologic activity that has wracked this moon.”

More on Saturn: if you want to put a chill down your spine, listen to the radio sounds of Saturn as registered by Cassini’s radio and plasma wave science instrument. They’re available here as an audio file. The radio waves seem to be generated by Saturn’s aurorae, producing a radio spectrum with rising and falling tones that sounds like something out of a 1950’s science fiction movie sound track. All similarities to Forbidden Planet are strictly coincidental!