‘Extremophiles’ Offer Clues to Life on Other Worlds

How did the mechanism for protein synthesis — the ribosome — come into being? Answering that question would be useful not just in the study of life on Earth, but also in learning where else in the universe we might expect to find life. Intense work on the subject is ongoing at the University of Houston, where a team led by George E. Fox, a professor of biology and biochemistry, is studying how protein synthesis began and evolved.

Protein synthesis happens when RNA copies genetic information from DNA and turns that raw data into proteins that are essential to the functioning of living cells. “Since many of the components of the ribosome are shared by all organisms, we know this machinery is very, very old,” Fox said. “If we can discover the earliest aspects, then scientists may be able to devise experiments to see how simple RNAs might have given rise to this machinery. This information would help us to better understand how life evolved on Earth and how ribosomes actually work, which remains a fundamental problem in biochemistry.”

One way you can study these things is by examining ‘extremophiles,’ forms of life that exist in environments once thought too extreme to sustain life. “All known living organisms on Earth share various biochemical properties, such as the same genetic code, the same major amino acids in proteins, and – with minor exceptions – the use of DNA or occasionally RNA as genetic material,” Fox said. “This suggests life had a single origin from an earlier ‘prebiotic’ world…”

In a separate endeavor, partnering with the Houston Museum of Natural Science, Fox and team have created a movie called “Fantasy Worlds: Exploring the Limits of Life,” which looks at known extremophiles and uses animations to explore the kind of planets on which such organisms might thrive. To this point, the movie is available only through showings at the museum in Houston, but one hopes for wider distribution. 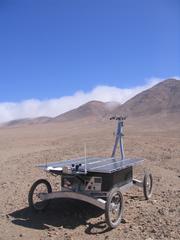 Meanwhile, the final stage of a project to develop a robotic astrobiologist is on track. Zoë is an autonomous rover that runs on solar power and is equipped to detect micro-organisms, which it will do during a two-month stay in Chile’s barren Atacama Desert. Last year, the robot traveled 55 kilometers autonomously and found living organisms using its Fluorescence Imager (FI) to locate chlorophyll and other organic molecules.

Image: Zoë in Chile’s Atacama Desert. Finding life in Earth’s most inhospitable terrain helps us tune up techniques of robotic autonomy that may one day uncover living organisms on other worlds. Credit: Carnegie Mellon University.

“This is the first time a robot is looking for life,” said Carnegie Mellon associate research professor David Wettergreen, who leads the project. “We have worked with rovers and individual instruments before, but Zoë is a complete system for life seeking. We are working toward full autonomy of each day’s activities, including scheduling time and resource use, control of instrument deployment and navigation between study areas.”

Zoë’s exploits in the Atacama have been the subject of an earlier story in Centauri Dreams. The desert’s interior is so dry that parts of it receive no precipitation for decades at a time. The robot will be guided remotely from an operations center in Pittsburgh as it looks for proof of life and maps the distribution of the various habitats. More on Zoë’s mission can be found here.