Changing the Shape of the Milky Way

Getting an overview of our own galaxy is tricky work. After all, we live in one of its spiral arms, so we see through a swarm of surrounding stars that mask the true galactic shape. Astronomer Ed Churchwell at the University of Wisconsin describes the effort as an attempt to define the boundaries of a forest from a vantage point deep within the woods. 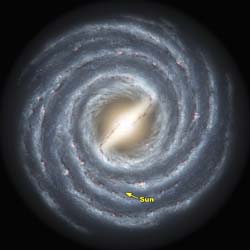 But when it comes to stars, changes of wavelength can help. Working in the infrared, the Spitzer Space Telescope can see through intervening clouds of interstellar dust to the Milky Way’s dazzling center. Churchwell and team’s latest work is a survey of 30 million stars using Spitzer data that has revealed details about what the Milky Way looks like from the outside. The picture, as shown in the illustration, is a bit different than we had been led to expect.

For cutting through the galactic center is what Churchwell calls a “long central bar.” Other galaxies have been observed with stellar bars — large bodies of gas, dust and stars. In fact, approximately one-third of all spiral galaxies are barred. No one is exactly sure how the bars form, but they seem to rotate as if they were solid objects and have the effect of channeling interstellar gas inward toward galactic center.

Within a bar, stars no longer follow circular orbits but move in more radial orbits that pass through the center of the galaxy. Suspicions had been growing that the Milky Way was a barred galaxy, but this new study seems to confirm the theory. The Milky Way’s bar consists of relatively old and red stars in a band perhaps 27,000 light years in length, longer than any previous estimates. In this era, the bar is tilted at about a 45 degree angle relative to a line between our own Sun and the center of the galaxy.