It was the Russian scientist Konstantin Tsiolkovsky who first proposed the idea of a space elevator — an incredibly strong cable stretching from the surface of the Earth to a point 100,000 kilometers in space. Along this track elevator cars would move, powered by electricity and whisking people and cargo into space at a tiny fraction of the cost of today’s chemical rockets. Tsiolkovsky was always ahead of his time, but the key drawback to the plan was that there was no cable material strong enough to support such loads.

Enter Sumio Iijima, who discovered carbon nanotubes in 1991. Long, cylindrical molecules whose walls are made of carbon atoms, nanotubes may turn out to be 100 times as strong as steel at one sixth the density. Carbon-nanotube composite fibers have been produced at kilometer lengths, but they’re not yet strong enough to provide space elevator capabilities. Nonetheless, ongoing work at places like Carbon Designs Inc. in Dallas may produce workable answers within the next few years. 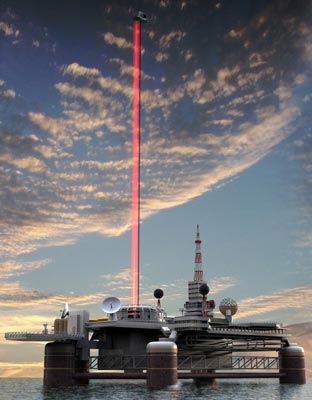 When Bradley Carl Edwards (who is founder and president of Carbon Designs) started plugging numbers into the space elevator concept, he came up with a $10 billion price tag for a single elevator, with a second (using the now proven technologies of the first, and leveraging its capabilities) running perhaps $3 billion. In terms of getting into space, subsequent costs are dirt-cheap. Here’s Edwards, writing in IEEE Spectrum Online: “The estimated operational cost for the first elevator is several hundred dollars per kilogram to any Earth orbit, the moon, or Mars, a drop of two orders of magnitude over the cost of current launch technologies. With the completion of subsequent elevators, the cost would drop even further, to a few dollars per kilogram.”

Image: A European Space Agency view of a space elevator anchored to an offshore sea platform in the Pacific. Credit: Erkki Halkka/ESA.

These numbers seem exaggerated to me, but read the entire Edwards article here; it’s laden with details. The overall plan is this: the elevator cable would rise from its anchor on the equator, passing through the geostationary orbit at 36,000 kilometers and continuing for another 64,000 kilometers until reaching a 600 ton counterweight. With its center of gravity at the geostationary orbit mark, the entire structure would move with Earth’s rotation. 20 ton cars would move up and down its cable. They would contain passenger quarters like a cruise ship, with windows opening to extraordinary views as the cars ascended, reaching geostationary orbit in about eight days.

Centauri Dreams’ take: dropping the cost of reaching space opens up everything from asteroid mining to solar power collectors in orbit. The contrast to today’s half-billion dollar a launch Shuttle situation is obvious. Other ideas for cheap space access are out there, including Leik Myrabo’s marvelous lightcraft concept. What is clear is that the old model of enormous chemical rockets lifting ever larger payloads will no longer suffice. As we set about building a space-based infrastructure in the inner Solar System, we will be putting the technologies into place that will one day produce robotic missions to nearby stars. The space elevator concept may get us going; it is robust enough to deserve intense and continuing scrutiny.

For more, see Marc Boucher’s The Space Elevator Reference, a weblog devoted to the concept. Be aware, too, of Edwards’ book The Space Elevator: A Revolutionary Earth-to-Space Transportation System (2003). Arthur C. Clarke’s The Fountains of Paradise remains the outstanding fictional treatment.