On Expansion into the Galaxy

How much do human cultures change over cosmically tiny time frames? Specifically, how alien would we find the Sumerian outlook on life if we could immerse ourselves in it today? How foreign would the world of pre-Columbian America appear to our touchy 21st Century ethics? Would we be comfortable, or capable of, adopting the cultural imperatives of either?

Now extend the question. Is it possible even within time frames of a few thousand years to imagine civilizations that are both stable over time while maintaining social goals like exploration and continual expansion? If the answer is questionable — and it is — then we can look at the Enrico Fermi paradox in another light. Perhaps the reason we haven’t found evidence of other technologies in our galaxy is that, while they are there, they are not expansionist over the periods of time needed to make themselves known to us.

Such are the musings of German physicist Claudius Gros (University of the Saarland), as developed in a recent issue of the Journal of the British Interplanetary Society. While working out a set of rate equations for the density of advanced civilizations, Gros points out that many scenarios for galactic expansion depend upon analogizing between what we see on Earth and what hypothetical alien societies might do. Thus we see lifeforms on Earth expanding until they have occupied every habitable niche. From this, we have taken for granted that this drive to expand would push mankind inevitably into the stars, fueling a colonizing wave that would engulf the galaxy.

But Gros notes that we are now seeing falling birth-rates in the industrialized world, and that we push intellectual and emotional reasons for expanding into space rather than the need to alleviate population pressure. “Our limited knowledge of the long-term dynamics of human, post-human and extra-solar advanced civilizations does not allow us presently to give a definitive answer to the question, whether humanity will ever produce social organizational forms stable over 103-106 years on a technically highly advanced level. And once it does, will this society be dedicated, at least partly, to long-term and peaceful expansion?” 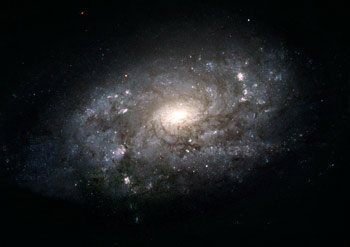 Image: The galaxy NGC 3949, a spiral galaxy like the Milky Way. Are such vast cities of stars the home of long-lived cultures that lack any expansionist agenda? Credit: NASA, ESA, Hubble Heritage Team (STCcI/AURA).

Indeed, it could be argued that a stable social fabric over hundreds of millennia would preclude long periods of expansion, which might introduce social instabilities. This does not rule out, says Gros, the idea that advanced alien civilizations might undergo periods of expansion, but these may be limited in duration. Such civilizations might exist in great numbers without tripping over the Fermi paradox. The answer to ‘where are they’ would be ‘they are out there and living peaceably on their own turf.’ Gros again:

Ad hoc assumptions are always a good thing to question when trying to deal with issues this intractable. The paper is Claudius Gros, “Expanding Advanced Civilizations in the Universe,” JBIS 58 (2005), pp. 108-110. Add it to the long list of papers flowing from a lunch table remark Fermi tossed off effortlessly some 55 years ago.