A Shoreline on Titan

Peering through Titan’s murky atmosphere with radar, the Cassini orbiter has sent back evidence of what may be a large shoreline on the moon, one where liquids flowed not long ago and may still be present. As shown in the image below, the shoreline divides a bright from a darker, smoother area where liquids seem to be involved. “This is the area where liquid or a wet surface has most likely been present, now or in the recent past, said Steve Wall, radar deputy team leader from NASA’s Jet Propulsion Laboratory. “Titan probably has episodic periods of rainfall or massive seepages of liquid from the ground.” 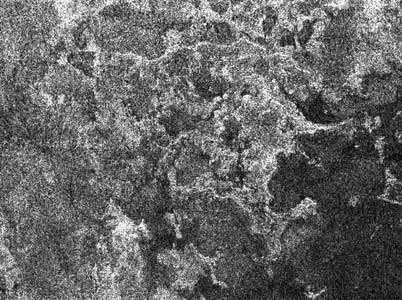 The evidence mounts up as scientists study bay-like features in the images, and networks of channels that may show where liquid hydrocarbons have flowed. Intriguingly, two types of channel formation seem to be present. The most recent Cassini pass shows long and deep channels indicating flow over large areas, while other images from previous radar passes show a dense network of channels that may be indicative of rainfall.

Image: This Synthetic Aperture Radar image of the surface of Saturn’s moon Titan was obtained by the Cassini spacecraft on Sept. 7, 2005. The boundary of the bright (rough) region and the dark (smooth) region appears to be a shoreline. The patterns in the dark area indicate that it may once have been flooded, with the liquid having at least partially receded. Credit: NASA/JPL.

From a JPL news release:

Dr. Larry Soderblom with the U.S. Geological Survey in Flagstaff, Ariz., said, “It looks as though fluid flowed in these channels, cutting deeply into the icy crust of Titan. Some of the channels extend over 100 kilometers (60 miles). Some of them may have been fed by springs, while others are more complicated networks that were likely filled by rainfall.”

Centauri Dreams‘ take: The most dramatic possibility pre-Cassini was that Titan might have actual oceans of liquid methane. Cassini has found nothing like that, but the evidence of a methane hydrological cycle on Titan is overwhelming. Another radar pass is scheduled for October 26, with 37 more flybys planned in the next few years. Cassini continues to unlock Titan’s mysteries, but it will take a Titan rover to study this bizarre world’s chemistry up close.