Mystery in the Heart of Andromeda

A strange blue light near the core of the Andromeda Galaxy promises to tell us much about black holes and the behavior of objects near them. First spotted in 1995 by the Hubble Space Telescope, the blue light was thought to emmanate from a single, massive star, or possibly an exotic source of energy that was little understood. But new spectroscopic observations show that the light is actually made up of 400 stars packed into a disk only one light year across. 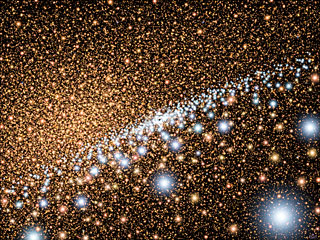 Now this is a very strange finding, for these young stars — thought to be on the order of 200 million years old — are revolving around the black hole at the center of Andromeda so closely that they should be torn apart. How could gas and dust coalesce to form stars in such an environment? Mysteries, of course, are just what astronomers like to find; they often lead to enough new data to revise earlier theories and produce more complete explanations.

Image: This artist’s concept shows a view across a mysterious disk of young, blue stars encircling a supermassive black hole at the core of the neighboring Andromeda Galaxy (M31). The region around the black hole is barely visible at the center of the disk. The background stars are the typical older, redder population of stars that inhabit the cores of most galaxies. Under the black hole’s gravitational grip, the stars are traveling very fast: 2.2 million miles an hour (3.6 million kilometers an hour, or 1,000 kilometers a second). Credit: NASA, ESA and A. Schaller (for STScI).

And that black hole at Andromeda’s center seems to be confirmed. The Hubble data are precise enough to rule out other exotic alternatives. The black hole that emerges, so to speak, has a mass equivalent to 140 million Suns. The blue stars that surround it are, in turn, nestled inside an elliptical ring of older, redder stars. And the fact that the blue stars are as young as they are implies they are only the most recent manifestation of a recurring phenomenon.

“The blue stars in the disk are so short-lived that it is unlikely in the long 12-billion-year history of Andromeda that such a short-lived disk would appear now,” said Tod Lauer of the National Optical Astronomy Observatory in Tucson, Arizona. “That’s why we think that the mechanism that formed this disk of stars probably formed other stellar disks in the past and will trigger them again in the future. We still don’t know, however, how such a disk could form in the first place. It still remains an enigma.”

Centauri Dreams‘ note: Forty detections of black holes have been accomplished, but in almost all cases the evidence is not conclusive. Until now, the only two unambiguous detections, according to astronomer John Kormendy of the University of Texas in Austin, were in the galaxy NGC 4258 and in our own Milky Way. Andromeda gives us three confirmed black holes, and opens up new speculation on star formation in circumstances where it was once thought impossible.

More in this European Space Agency news release. The team’s results will appear in the September 20 issue of The Astrophysical Journal.

Next post: Man or Machine to the Outer Planets?