Centauri Dreams recently looked at Titan as a possible abode for life, energized by a paper given at the Division of Planetary Sciences meeting by David Grinspoon. A researcher at the Southwest Research Institute (Boulder, CO), Grinspoon is also an author whose book Lonely Planets: The Natural Philosophy of Alien Life (New York: Harper, 2004) discusses in depth and style the issue of extraterrestrial life and where we might find it. His Web site offers numerous links to his scientific output and materials from his book. 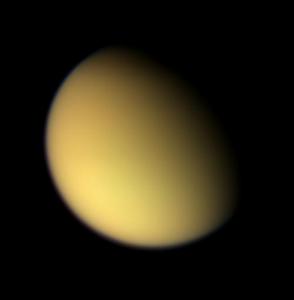 Grinspoon has been all over the news lately, as witness this interview in the online journal Astrobiology Magazine. Recently, he was kind enough to forward a copy of his DPS paper “Biologically Enhanced Energy and Carbon Cycling on Titan?” Centauri Dreams reads a lot of research papers, but Grinspoon’s work stands out not only for its rigor but its sheer energy. He speculates, for example, that our model of miniaturized cellular life in water on Earth may be misleading as a model for life elsewhere. Titan could involve “…huge (by Earth standards) and very slowly metabolizing cells…”

Image: As Cassini approached Titan on Aug. 21, 2005, it captured this natural color view of the moon’s orange, global smog. Could there be life beneath the haze? Credit: NASA/JPL/Space Science Institute.

Another intriguing notion: biological heating could contribute to the smoothness and surface activity on Titan, contributing to melting of water-ammonia ice. “There may be places on Titan that are energy-rich but liquid-poor, with plenty of acetylene to metabolize, though it may be locked up in ice. In such a case, evolution would favor organisms that could use this energy to melt their own little watering holes.”

The key issue faced by proponents of life on Titan is energy — what could sustain a metabolism on or near the frigid surface? Grinspoon can suggest an answer. In Titan’s upper atmosphere, methane is being turned into other molecules, among them acetylene, which condenses and falls to the surface. Such acetylene could turn back into methane by reacting with hydrogen gas; quite a bit of energy would result. From the paper:

“Because of acetylene’s higher specific gravity, solid acetylene may be present at the bottom of the ethane-methane reservoirs and available as an energy source for various chemical reactions that involve a multitude of organic compounds. The dearth of obvious impact features in early high-resolution Cassini imagery…and inferred youth of the surface imply the possibility of active resurfacing and possible burial or subduction mechanisms that could supply subsurface liquid reservoirs with acetylene and other photochemical products.”

The paper “Biologically Enhanced Energy and Carbon Cycling on Titan?” appears in Astrobiology Vol. 5, No. 4 (Nov, 2005), pp. 560-567; particularly noteworthy is its list of search parameters for possible life on Titan. Grinspoon notes in an e-mail message that he is now working on thermal modeling of idealized Titan organisms and the possibilities of their channeling waste heat into the environment, but this work is still in its preliminary stages.