There aren’t many natural disasters we know how to prevent, as the recent sad events along the Gulf of Mexico demonstrate. But one thing we can manage with today’s technology is to deflect an incoming asteroid so that it doesn’t destroy a large chunk of the Earth. At least, we think we can manage it, but it will take technology testing like the European Space Agency’s Don Quijote mission to see whether asteroid deflection really is within our capabilities. 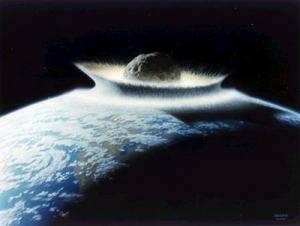 Don Quijote is envisioned by ESA’s Advanced Concepts Team as a two-part mission. One spacecraft, named Hidalgo, is to strike the asteroid; the other, named Sancho, is to orbit the asteroid months before Hidalgo’s advent, observing it before and after impact. ESA has now selected two target asteroids for this mission, designated 2002 AT4 and 1989 ML. Design options for the twin spacecraft are now under active consideration.

Image: An artist’s impression of an asteroid striking the Earth. Credit: ESA.

But wait — isn’t deflecting even a low-risk asteroid asking for trouble? This ESA news release says no:

In other words, choosing an asteroid that is not an Earth-crosser will allow deflection testing with no risk to Earth. A final decision between the two ‘finalist’ asteroids for the Don Quijote mission will not be made until 2007.

And remember 2004 MN4, an asteroid some 400 meters in diameter once thought to pose a risk for impact in 2029? It has now been in the news enough to have been given an official name, (99942) Apophis. Recent observations at Arecibo have reduced the impact possibility sharply for 2029, although this is quite a near miss, a close approach of about 32,000 kilometers, which places the asteroid within the geosynchronous orbit used by telecommunications and weather satellites. And just because 2029 is unlikely to see a collision, we don’t know how the close pass will affect the future path of the asteroid.

All in all, Don Quijote is a necessary and worthwhile mission, and one of its significant effects should be to continue to raise public awareness of the threat of such impacts. Be aware as well of the active work of the B612 Foundation, whose goal is to …”significantly alter the orbit of an asteroid in a controlled manner by 2015.”