Orbits, Atoms and the Genesis Mission

Celestial mechanics seems a long way from atomic physics, but new work by scientists and engineers suggests some remarkable parallels. In fact, the mathematics describing both have provided new designs for space missions, as witness the Genesis spacecraft, which returned particles from the solar wind to Earth. Genesis’ highly unstable orbit was controlled by the L1 Lagrange equilibrium point, a point between Earth and the Sun where the gravity of both bodies is balanced. The orbit is an example of a chaotic trajectory identical to those traversed on the atomic level by highly excited electrons. 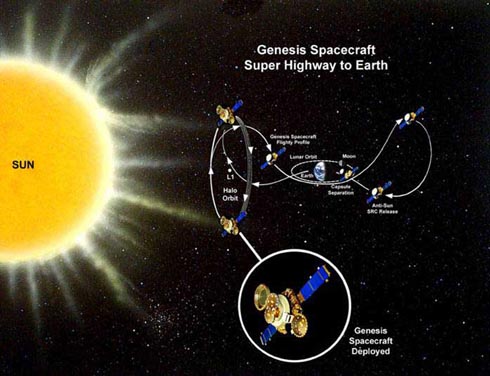 The linkage between orbits and atoms is discussed in an article running in an article called “Ground Control to Niels Bohr: Exploring Outer Space with Atomic Physics,” running in the October 2005 issue of Notices of the American Mathematical Society. The article is also available online through the AMS Web site (free registration required). Authors Mason A. Porter and Predrag Cvitanovic write that the “…almost perfect parallel between the governing equations of atomic physics and celestial mechanics implies that the transport mechanism for these two situations is virtually identical…”

This is provocative stuff, but with such insights, engineers, mathematicians and physicists were able to set Genesis on a trajectory that met its misson goals with a minimal use of fuel. From the article:

On the celestial scale, transport takes a spacecraft from one Lagrange point to another until it reaches its desired destination. On the atomic scale, the same type of trajectory transports an electron initially trapped near the atom across an escape threshold (in chemical parlance, across a “transition state”), never to return. The orbits used to design space missions thus also determine the ionization rates of atoms and chemical-reaction rates of molecules!

Centauri Dreams’ take: In addition to providing new tools for mission designers, this work is valuable because, like spacecraft, comets and asteroids can also behave in a chaotic way, making an accurate determination of some orbits difficult. Creating a statistically valid description of near-Earth asteroids demands tools that can make sense of chaotic systems. Clearly, the crossover work occurring between astronomers, mathematicians and chemists can provide unexpected insights toward this goal.