A Moon for Xena

Everyone is calling 2003 UB313, the Solar System’s 10th planet, Xena. The name comes from a TV warrior princess of whom the curmudgeonly Centauri Dreams, never one for television, was utterly unaware. Now Xena has been found to have a moon, inevitably named Gabrielle after an equally incrutable character on the series (apparently the sidekick of Xena herself). One-tenth the size of Xena, Gabrielle is slated for further observations with the Hubble Space Telescope that will allow more accurate determination of its mass.

The advent of Gabrielle is good news for those wishing to learn more about Xena. From a California Institute of Technology press release quoting Michael Brown, the 10th planet’s discoverer: 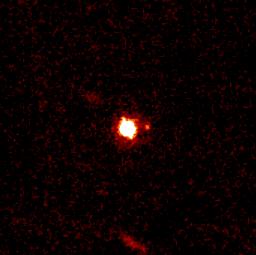 Given the distances involved (Xena is now some 97 AU from the Sun, or 9 billion miles), it’s intriguing to learn how the moon was spotted. The work was performed using adaptive optics at the Keck Observatory in Mauna Kea. The technology allowed Brown and colleagues to remove the blur of atmospheric turbulence to create images as sharp as those from space-based instruments. Keck uses a laser guide system that actually creates an artificial ‘star’ with a laser beam, bouncing its light off the atmosphere. This allows for the needed correction for atmospheric effects and an unprecedentedly clear view from a ground-based system.

Centauri Dreams‘ take: we keep finding moons around these odd outer system objects. In fact, 2003 EL61 was found to have a moon (also discovered by Brown using adaptive optics) in January, and we know that both Pluto and Xena have moons. All of which may force a reexamination of conventional views of gravitational capture, which is how such moons have been explained until now. It is possible that actual collisions between Kuiper Belt objects may emerge as the prime factor in their formation, although we clearly have just begun our study of this strange realm.

For more, see this page from Michael Brown’s Web site.