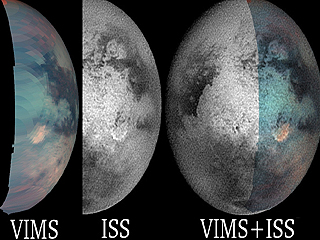 What is that bright 300-mile wide patch on Xanadu, the continent-sized region on Titan, that Cassini noted last March? The area outshines everything else on the moon in long infrared wavelengths (it’s described as “…spectacularly bright at 5-micron wavelengths…”), and after considerable investigation does not appear to be a cloud, a mountain or a geologically active hot spot. In visible light, Cassini saw a bright arc-shaped feature of approximately the same size in late 2004 and again in 2005.

That quotation above comes from a University of Arizona news release, one that goes on to note that subsequent radar imaging found no real temperature variation between the spot and the terrain around it. That rules out the possibility of an active ice volcano, and quickly eliminates the idea of a huge mountain as well (the lack of temperature drop gives this one away). And if the spot is a cloud, it’s one that hasn’t budged in three years, according to observers at the Keck Telescope and the evidence of five Cassini flybys.

“The bright spot must be a patch of surface with a composition different from anything we’ve seen yet. Titan’s surface is primarily composed of ice. It could be that something is contaminating the ice here, but what this might be is not clear,” said Jason W. Barnes, a postdoctoral researcher at UA’s Lunar and Planetary Lab.

So Titan’s surface is even more varied than previously thought. If this is indeed some kind of ice contamination, we still don’t know why it occurs here and not elsewhere. For more, see the October 7 issue of Science. The paper is Barnes, Brown, Turtle et al., “A 5-Micron-Bright Spot on Titan: Evidence for Surface Diversity,” Science 310, pp. 92-95 (2005).