Life’s Origins in the Cosmos

To make life happen you need organic molecules that contain nitrogen. Now new work at NASA’s Ames Research Center, to be reported in the October 10 issue of the Astrophysical Journal, reveals that organic molecules found throughout the galaxy do, in fact, contain nitrogen. “Our work shows a class of compounds that is critical to biochemistry is prevalent throughout the universe,” said Douglas Hudgins, an astronomer at NASA Ames and principal author of the study. The studies combined laboratory experiments and computer simulations.

We already knew, thanks to the Spitzer Space Telescope, that complex organic molecules called polycyclic aromatic hydrocarbons (PAHs) are all but ubiquitous. Learning that PAHs contain nitrogen implies that the building blocks of life are seeded everywhere in the universe. From a NASA Ames news release, quoting astrochemist and team member Louis Allamandola:

“Chlorophyll, the substance that enables photosynthesis in plants, is a good example of this class of compounds, called polycyclic aromatic nitrogen heterocycles, or PANHs. Ironically, PANHs are formed in abundance around dying stars. So even in death, the seeds of life are sewn,” Allamandola said.

You can learn much more about this research and how it proceeded from the NASA Ames site. From the analysis found there:

This is the first direct evidence for the presence of complex, prebiotically important, biogenic compounds in space and brings us a step closer to assessing if life’s origin on Earth may have had a helping hand from infalling stardust. The bulk of the astronomical evidence points to the formation of these nitrogen containing PAHs in the winds of dying stars which inject them into interstellar space. Eventually they become incorporated into the clouds of material that give birth to stars and planets. Freshly formed planets continue to collect infalling material (dust, asteroids, meteorites, and comets) from the star formation process and life on Earth is thought to have emerged from this primordial chemical soup.

A preprint of the paper is also available (PDF warning). 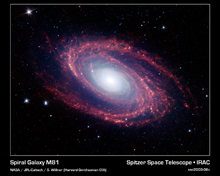 Image (click to enlarge): NASA Spitzer Space Telescope image of the spiral galaxy M81, located some 12 million light years from Earth. The infrared radiation emitted by polycyclic nitrogen-containing aromatic hydrocarbon (PANH) molecules is shown in red. This emission is excited by star (and planet) formation along the edges of the spiral arms. Credit: NASA Ames.

Centauri Dreams‘ take: according to the Ames researchers, more than a hundred tons of extraterrestrial materials fall to Earth every year, much of it in the form of organic compounds. Imagine how much greater the amount of such infall must have been in the era when the planets were still young and the Sun’s debris disk more congested. The primordial Earth must have been inundated with compounds now understood to be complex and significant in the formation of life. Clearly, the study of life on Earth and presumably elsewhere in the cosmos now links directly to the study of interstellar chemistry.

Does this conclusion have implications for the Fermi paradox? A recent paper in the Journal of the British Interplanetary Society discusses the ‘where are they’ question in the context of discoveries like the above. We’ll look at Deardorff, Haisch et al., “Inflation-Theory Implications for Extraterrestrial Visitation” in an upcoming entry.