It was in 1999 that former NASA administrator Dan Goldin spoke to the American Astronomical Society about what future telescopes might be able to see around distant stars. He imagined a classroom filled with images of exoplanets. “When you look on the walls, you see a dozen maps detailing the features of Earth-like planets orbiting neighboring stars,” Goldin said. “Schoolchildren can study the geography, oceans, and continents of other planets and imagine their exotic environments, just as we studied the Earth and wondered about exotic sounding places like Banghok and Istanbul . . . or, in my case growing up in the Bronx, exotic far-away places like Brooklyn.”

Is a telescope that could take such pictures remotely conceivable? The most innovative proposal I’ve heard to achieve these goals is Webster Cash’s New Worlds Imager concept. The University of Colorado at Boulder astronomer knows how tricky the project would be. As astronomer looking at the Earth from Alpha Centauri would face the problem that the planet would appear 10 to 20 billion times fainter than the Sun, depending on the Earth’s position in its orbit. 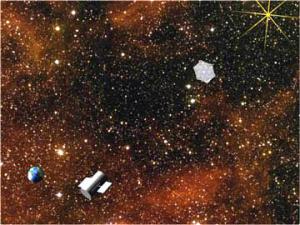 Cash hopes to get around such problems by placing a kilometer-wide sheet of plastic into space, a sheet with a hole meters-across in the middle. A spacecraft tens of thousands of kilometers away would be equipped with a standard telescope with an aperture the same size as the hole in the sheet. The result: a celestial pinhole camera, one that would spread the image of a distant planetary system across the sky as seen by the properly aligned secondary spacecraft and its telescope.

Image: An artist’s rendition of a single starshade-collector pair searching a star system for Earth-like planets. From bottom to top: collector spacecraft, starshade, and star system under study. The Earth is shown in the background. Credit: Webster Cash et al.

From a NASA story on New Worlds Imager by Ronald Toland at Goddard Space Flight Center:

The basic building block of the New Worlds Imager is a pair of spacecraft, a starshade and a collector, that function together as a single pinhole camera. The starshade serves as the pinhole for the camera, though the entire shade will be a kilometer (0.6 miles) or more in diameter, with a hole about 10 meters (10 yards) across punched in the center. The collector holds a telescope with a primary mirror the same size as the pinhole: 10 meters. To guarantee the best images, the starshade and collector need to be separated by about 200,000 km, or about half the distance from the Earth to the Moon. Two starshade-collector pairs, their images combined in a central combiner spacecraft, form the New Worlds Imager.

An early New Worlds Explorer system should be able to provide spectroscopic analyses that would help us understand the atmosphere of Earth-like worlds. Later generations, using numerous spacecraft that pool their data through interferometry, may be able to offer breathtaking closeups. “There is no necessary limitation on this optical system,” Cash told me during a 2003 interview. “We might create a view as close as a hundred kilometers, looking at weather systems, oceans, continents.” The only limitation would be the orbital inclination of the planet around its star; we would only see its surface as presented to us along our line of sight. But that limitation seems insignificant compared to the knowledge we would gain.

Cash’s concept is stunning, as was Goldin’s vision of that future classroom. Now comes the welcome news that New Worlds Imager has moved beyond its earlier Phase I work at NASA’s Institute for Advanced Concepts and has been granted a Phase II award, one of five proposals to receive such a grant for the period Sept. 1, 2005 to Aug. 31, 2007. Phase II funding means Cash’s earlier work, available at the NIAC site, is to be advanced through a longer and better funded grant of up to $400,000. You can see an overview of the project with useful background material here (PDF warning).