The Best View of Proxima Centauri

Proxima Centauri is not exactly an imposing star. In fact, this tiny M-class red dwarf would not be noticeable even in the skies near Centauri A and B except for its huge parallax, an indication to local sky-watchers that it was in the vicinity and moving fast. Some astronomers have suggested that Alpha Centauri may, in fact, not be a triple-star system after all, that Proxima is simply an independent star passing through the neighborhood. But the jury is still out on that one. 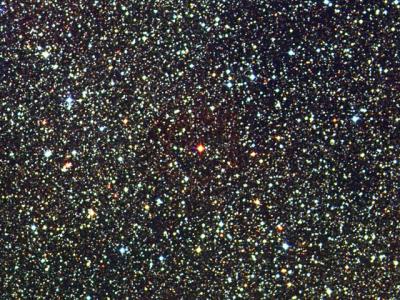 Nonetheless, the interest Proxima exerts is almost hypnotic, because at 4.22 light years, it is the closest of all known stars (Centauri Dreams leaves open the possible, and in my view likely, discovery of a red or brown dwarf even closer). The image above (click for a closeup) was selected by the good people at Goddard Space Flight Center as Astronomy Picture of the Day last week, and it’s the best image I’ve ever seen of the tiny star. You’ll find it in the dead center of the picture, a red flare star that invites curiosity and, we may hope, a future probe.

If the question of Proxima’s real position in the Alpha Centauri system intrigues you, the paper to consult is Robert Matthews and Gerard Gilmore, “Is Proxima Really in Orbit About Alpha CEN A/B?” Royal Astronomical Society Monthly Notices 261, no. 2 (1993), pages L5-L7.