The Art of the Wormhole

Last week Centauri Dreams discussed the possible signature of a wormhole in astronomical data, as worked out in a 1994 paper titled “Natural Wormholes as Gravitational Lenses.” A wormhole moving between Earth and another star would show an odd but identifiable form of lensing — two spikes of light with a dip in the middle. But what would a wormhole look like if you could actually see it? Space artist Jon Lomberg had some thoughts on that and shared them in the following e-mail.

The wormhole entry was fascinating. I had the opportunity to try to visualize how a wormhole would look during the production of the film CONTACT. For the novel on which the film was based, Carl Sagan had asked Kip Thorne [Feynman Professor of Theoretical Physics at CalTech, and author of Black Holes and Time Warps: Einstein’s Outrageous Legacy] for guidance to keep the wormhole as scientifically plausible as possible. During the film’s production, I consulted with Kip to determine the appearance of a wormhole. Kip and his student Scott Hughes tried to calculate the paths of photons traveling through the wormhole, seen from outside the wormhole.

“Try not to make them look like black holes,” Kip advised. “It shouldn’t look like a vortex, a spinning accretion disk or anything like that.” Turns out that a wormhole doesn’t look like a hole at all. Rather than a hole in space, it would look like a blister in space, with a convex surface bulging out at you. A highly distorted, partially rotated image of the scenery on the other end might be discerned. Because of the large amount of negative energy required to keep the wormhole open, I envisioned some lensing distortions of the space around this side of the wormhole.

If you recall, once Ellie goes through the wormhole, she first emerges around Vega, gets a glimpse of the surroundings, and is almost immediately drawn into another wormhole, emerging over an icy moon orbiting an inhabited planet with a multiple star system in the sky. The following concept illustration [below] shows a wormhole approaching the viewer. A distorted image of the galactic center (the next stop) is seen on the convex shape of the wormhole’s mouth.

The image below is the scene she would travel into, a grand galactic panorama. A third wormhole is approaching in the distance, with a close view of the galactic center within it. This scene was cut, but the art in this sequence suggests how the wormhole could have appeared with digital graphics. 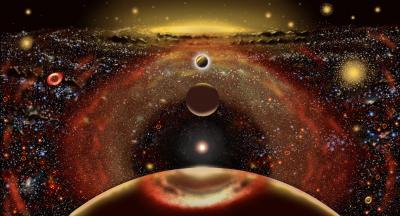 But at the conclusion of our work, the director and effects producer decided that the wormhole should not appear the way we had shown it, but should look like a vortex, exactly as Kip had cautioned against. Kip and I both hope that some future production will attempt to show these enigmatic objects in a way that distinuishes them from the very different phenomenon of a black hole.