Centauri Dreams admits to being less than absorbed by the debate over whether Pluto is or is not a planet. Let the logic-choppers have their day; what’s interesting is that whatever we call it, Pluto remains an enigmatic, unexplored world that has much in common with other Kuiper Belt objects. And its enigmatic nature seems reinforced by recent studies showing that the surface of Pluto is actually colder that it ought to be. 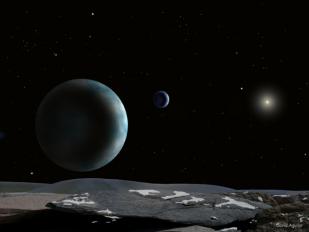 Measuring surface temperatures on a body currently 30 AU from the Sun is tricky business, to be sure, and remember that in the course of a Plutonian year, that distance can vary from 30 to 50 AU, causing what little atmosphere is present to freeze and fall to the surface in the form of snow or ice. But studies of how sunlight is reflected from Pluto and its largest moon Charon — using the Submillimeter Array (SMA) on Mauna Kea in Hawaii — have enabled the first thermal measurements that could discriminate between the two objects.

Image: In this artist’s concept, Pluto and its moon Charon are seen from the surface of one of Pluto’s newly discovered candidate satellites. Credit: David A. Aguilar (Harvard-Smithsonian Center for Astrophysics.

Here’s what we’ve learned: Pluto is currently showing about 43 K (-382 degrees F) instead of an expected 53 K (-364 degrees F); the latter is what Charon registers, and what best fits our current data about both worlds. One theory that can explain this is that sunlight is converting some Plutonian nitrogen ice to gas, a process that would be in equilibrium with Pluto’s thin nitrogen atmosphere and would divert some of the expected surface heating.

Mark Gurwell (Harvard-Smithsonian Center for Astrophysics), who coauthored a paper on this work along with Bryan Butler of the National Radio Astronomy Observatory, has a great quote: “”We all know about Venus and its runaway greenhouse effect.” says the astronomer. “Pluto is a dynamic example of what we might call an anti-greenhouse effect. Nature likes to leave us with mysteries – and this was a big one.” We’ll learn more when this research is presented at the American Astronomical Society meeting in Washington.