The return of the Stardust mission draws near. The spacecraft should jettison its return capsule around 5 AM EST on January 15; the latter is to plunge into Earth’s atmosphere at the highest return speed ever recorded, some 29,000 miles per hour. A parachute will bring the capsule to the ground at the Utah Testing and Training Range southwest of Salt Lake City, and at that point we should have our first samples of primordial cometary dust, captured two years ago near Comet Wild 2. Even more intriguing, we should have particles of interstellar dust collected during the long approach to the comet.

This has been a remarkable mission, and at times a scary one. Stardust was launched in February of 1999 and began collecting interstellar dust in 2000. 2.88 billion miles have accumulated during this voyage, including a gravity assist from Earth and an encounter with asteroid 5535 Annefrank. In November of 2000, a vast solar flare skewed the spacecraft’s navigation system by creating false pixels in its digital cameras, producing signals the onboard computer interpreted as stars. Stardust was, in a word, lost, its communications with Earth disrupted. Fortunately, controllers were able to correct the situation, and a successful encounter at Wild 2 followed three years later. 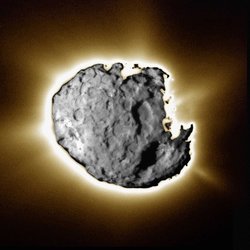 Stardust returns with thousands of comet particles less than a millimeter in size and about 100 bits of interstellar dust, all captured by a light and porous material called aerogel. Collecting this bounty was also a dicey proposition. Streaming from the comet at 13,000 miles per hour, several particles larger than bullets struck the spacecraft. But Stardust survived, and was able to take 72 pictures of the cometary nucleus with its navigation camera.

Image: A composite view of Wild 2, combining two images taken from the Stardust spacecraft on Jan. 2, 2004 shows the comet and jets. Sunlight is reflected from dust and rocks flowing off the comet. Note the unusual surface, filled with craters, pinnacles and canyons in sharp definition. Credit: Jet Propulsion Laboratory.

The materials being returned by Stardust can be considered building blocks of the Solar System, cryogenically preserved because for most of their existence they were in the region of the outer planets. Says University of Washington astronomy professor Donald Brownlee, principal investigator for the mission, “Virtually all the atoms in our bodies were in little grains like the ones we’re bringing back from the comet, before the earth and sun were formed. Those grains carry elements like carbon, nitrogen and silicon from one place to another within our galaxy, and they helped form the sun, the planets and their moons.”

Among the Stardust firsts are these significant items: it is the first solid sample return mission since Apollo, and the first to return samples from beyond Lunar orbit. Stardust is also the first spacecraft to collect interstellar dust. A podcast interview with Dr. Brownlee can be found here.