Making accurate measurements of distant binary objects isn’t easy, but it helps when the two targets are edge-on as seen from Earth. That sets up an eclipsing binary, and in the case of a newly discovered duo of brown dwarfs in the Orion Nebula, provides helpful information. We now know that the the larger of the two brown dwarfs is 55 times the mass of Jupiter, while the smaller is 35 times larger (with a 10 percent margin of error in the calculation). Such measurements help firm up theoretical models of brown dwarf formation and composition. 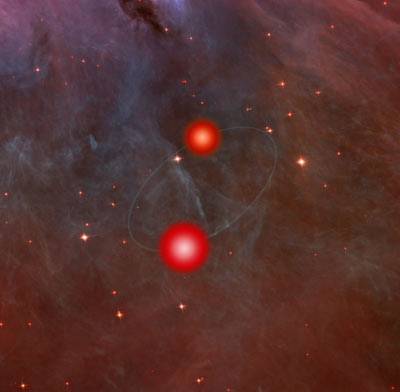 Image: An artist’s conception of a pair of eclipsing brown dwarfs. Credit: NASA, ESA, and A. Feild (STScI).

“This binary pair is a ˜Rosetta stone’ that will help unlock many of the mysteries regarding brown dwarfs,” says Keivan Stassun, assistant professor of astronomy at Vanderbilt University, who led the team of astronomers who made the new observations. “We understand how stars form in the crudest sense: They are formed when clouds of dust and gas collapse. But many of the details of the process remain a mystery, particularly the factors that determine what a star will weigh.”

The findings mark the first time we’ve measured the mass, size and surface temperature of brown dwarfs, a major stride in their study. The cutoff point below which a brown dwarf cannot be a hydrogen-burning star is 80 Jupiter masses, which is large enough to provide nuclear fusion (by comparison, the Sun is 1000 times the mass of Jupiter). And the odd thing about the new measurements, which are reported in the journal Nature this week, is that the larger dwarf is cooler than the smaller. As you would expect, this finding contradicts previous models and may mean the two are not the same age. Stassun again:

“One possible explanation is that the two objects have different origins and ages. If that is the case, then it supports one of the outcomes of the latest efforts to simulate the star-formation process. These simulations predict that brown dwarfs are created so close together that they are likely to disrupt each other’s formation.”

Centauri Dreams‘ take: Brown dwarfs become increasingly interesting as we realize they may be far more common than first thought. Indeed, the Nature article supports the notion that dwarfs begin as star-sized objects but shrink and cool as they age; we may have been observing numerous brown dwarfs without realizing their actual nature. The new observations provide hard data to refine our models. Although their small size and dim light make them hard to detect, brown dwarfs closer than the Centauri stars may eventually be found, a fascinating consideration as we ponder future missions.

Previous post: Andrew Gould on the Science of Microlensing