A Brown Dwarf in the Neighborhood

How many brown dwarfs await discovery near the Sun? Nobody knows, but the most recent is an interesting object indeed. Found some 12.7 light years from Earth as a companion to the red star SCR 1845-6357, it is the third closest brown dwarf yet discovered. “If you think of the galaxy as being the size of Tucson,” says Laird Close (University of Arizona), “it’s kind of like finding someone living in the upstairs of your house that you didn’t know about before.”

And that’s not all that makes the new dwarf interesting. Its surface temperature of 750 degrees Celsius makes it a remarkably cool object, one of the lowest-temperature dwarfs ever found. SCR 1845-6357 is some ten times less massive than our Sun; it is located in the southern hemisphere constellation Pavo (the Peacock). The small size of this star is interesting because until now, no brown dwarfs had been found around stars with less than half the mass of the Sun. And what we can deduce about its companion is that the brown dwarf is 4.5 AU from the star, and anywhere between 9 and 65 times as massive as Jupiter. Few brown dwarfs are known to come within 10 AU of their primary. 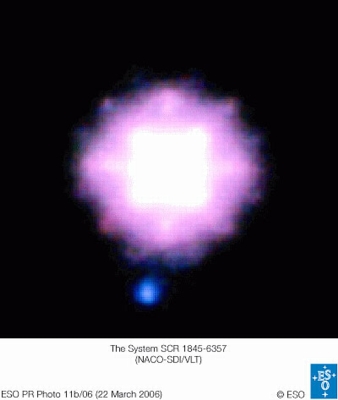 Image: University of Arizona and European astronomers took this image of a very cool brown dwarf orbiting a star near our sun using the SDI camera on the Very Large Telescope in Chile. The substellar companion appears blue in this image. It is roughly 50 times fainter than its star, and 4.5 times the Earth-Sun distance away from its star. Credit: Beth Biller and Laird Close, UA Steward Observatory.

The payoff on the new discovery could be significant. Says Markus Kasper (European Southern Observatory, and a member of the discovery team):

“This newly found brown dwarf is a valuable object because its distance is well known, allowing us to determine with precision its intrinsic brightness. Moreover, from its orbital motion, we should be able in a few years to estimate its mass. These properties are vital for understanding the nature of brown dwarfs.”

The closest known brown dwarfs? They both orbit Epsilon Indi, 11.8 years away. And here’s an interesting thought: of the seven brown dwarfs within 20 light years of the Sun, five are known to have a companion. Brown dwarfs, at least from this evidence, seem to occur as part of larger systems rather than as solo objects. Only future observations of other nearby dwarfs will tell us whether this is coincidence or evidence of a pattern of brown dwarf formation.

The details of this work are slated to appear in a letter to the Astrophysical Journal as Biller, Kasper, Close et al., “Discovery of a Very Nearby Brown Dwarf to the Sun: A Methane Rich Brown Dwarf Companion to the Low Mass Star SCR 1845-6357.” Nice work indeed by University of Arizona graduate student Beth Biller on this exceptional find.

Next post: Transit Window Soon to Open for GL 581