Eberhardt Rechtin: Death of a Pioneer

Centauri Dreams is saddened to learn of the death of Eberhardt Rechtin, a pioneer of deep space exploration. The list of his accomplishments is long: Rechtin served as CEO of Aerospace Corporation (El Segundo, CA), as chief engineer of Hewlett-Packard, and as director of the Defense Advanced Research Projects Agency. But his career is best remembered for his work on the Deep Space Network that today allows us to track probes at the edge of the heliosphere.

Building that network was a towering achievement, and one that seemed unlikely in the 1950s, when Rechtin developed Microlock, a system of receivers that, when deployed at different ground stations, could compensate for the shifting frequencies produced by rockets in flight. Those of us who remember the days right after Sputnik may recall that there was an intense effort to expand America’s ground tracking capabilities thereafter. Microlock was at the heart of it, expanding to the system that tracked the first US satellites. The Deep Space Instrumentation Facility would emerge as its successor.

DSIF grew as early robotic flights to the Moon became feasible and the first parabolic dish went up at Goldstone in California’s Mojave Desert. The system received an early shakeout with the launch of Pioneer 3, communicating with the spacecraft throughout its failed attempt to reach the Moon. Rechtin could see that a worldwide system of receivers would be needed for future space work, one that could provide round-the-clock coverage through stations at Woomera (Australia), north of Johannesburg in South Africa and Goldstone itself. 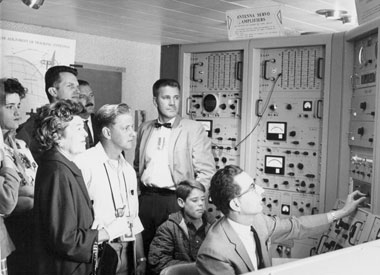 By late 1963, DSIF had become the Deep Space Network. The big 210-foot dish that followed at Goldstone was complemented by changes of venue elsewhere, from Woomera to a site near Canberra, and out of South Africa to Robledo, near Madrid. An article on the DSN by Mark Wolverton quotes Rechtin on the challenges involved:

“I was told by Nobel Prize winners that it would not be possible really to communicate to the edge of the solar system,” Rechtin recalled in a 1995 oral-history interview with the Institute of Electrical and Electronics Engineers. “If you could, you couldn’t send back enough interesting information. You would have to have bandwidths of your receiving system wide enough to account for the Doppler shifts. If you did that you had to send megawatts of power back from enormous antennas at the edge of the solar system. Nobody knew how to do that… . Well, I sat down and figured out, ‘Wait a minute. We could track the Doppler.’”

Rechtin’s work at perfecting the phase-locked loop receiver helped the network compensate for the Doppler effect: the changes in frequency and wavelength caused by the relative motion between spacecraft and receiver on Earth. And his labors on solid-state ruby crystal masers (maser = microwave amplification by stimulated emission of radiation) allowed the creation of the world’s most sensitive radio receivers.

To say that sensitivity is critical for deep space work is a gross understatement. Ponder this: When Voyager’s 23-watt signal reaches us today, it delivers 20 billion times less power than a digital wristwatch, and its beam width is a thousand times greater than Earth’s diameter. But we’re still tracking the Voyagers, and plan to continue at least until 2020.

You can read more about the fascinating early days of the DSN in the Wolverton article, but do read Rechtin’s obituary in the Los Angeles Times as well. And let me throw in a plug for Wolverton’s outstanding book The Depths of Space: The Pioneer Planetary Probes (Joseph Henry Press, 2004), an essential resource for anyone tracking deep space research.