How do you get two supermassive black holes in each other’s neighborhood? That’s the question raised by the discovery of a pair of such objects, each 150 million times more massive than the Sun, and separated by a cosmically minute 24 light years. They’re in the center of a galaxy called 0402+379, some 750 million light years from Earth, and they orbit each other every 150,000 years.

“Astronomers have thought for a long time that close pairs of black holes should result from galaxy collisions,” says Cristina Rodriguez (University of New Mexico and Simon Bolivar University in Venezuela). And that’s apparently what happened here. Astronomers working with the Very Long Baseline Array (VLBA) radio telescope think that these black holes were each at the core of separate galaxies.

A collision between the galaxies would then have left the two objects orbiting each other. It would be intriguing indeed if the black holes themselves would collide, as the event should cause strong gravitational waves that could be detected with next-generation equipment like the Laser Interferometer Space Antenna (LISA). But a collision doesn’t seem to be in the cards for over a billion billion years.

Remarkably, collisions between galaxies are not uncommon, and the binary black hole pairs that result seem to become heavily involved in the subsequent evolution of these galaxies. Nor are pairs of smaller black holes a rarity; such pairings, each with a mass a few times that of the Sun, have been found in the Milky Way. But until now the closest confirmed pair of the supermassive variety were separated by 4500 light years. It took the continent-wide VLBA, which consists of ten radio-telescope antennae, to provide the resolving power to see two objects in such proximity. 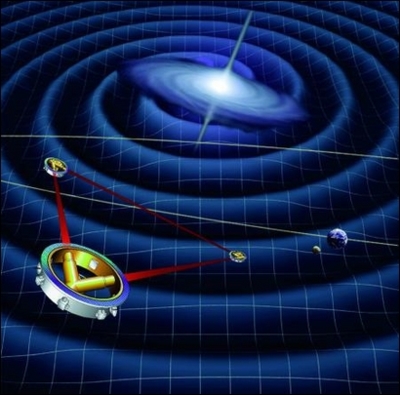 Image: LISA will be the first space-based mission to attempt the detection of gravitational waves. These are ripples in spacetime that are emitted by exotic objects such as black holes.

Centauri Dreams note: The LISA mission referenced above will consist of three spacecraft flying roughly 5 million kilometers apart, acting as an interferometer that can measure the distortions in space associated with gravitational waves. The waves should change the distance between the spacecraft in a direction that is perpendicular to the direction of the wave propagation. The distances involved are incredibly minute, but should be measurable by lasers aboard the spacecraft. Such observations should enable us to put General Relativity and black hole theory to the most accurate tests ever made.