The red rain that fell in the Indian state of Kerala continues to create interest. Are the particles found suspended within it extraterrestrial in nature? The rain first fell on the 25th of July, 2001, but red rain phenomena continued to occur for two months thereafter, although in some cases other colors appeared, and there are reports of colored hailstones. This was no one-shot event. I’ve held off on this story hoping to get further information, but enough readers have asked for details that I’ll go with what we now have.

We know this much: The red color is caused by the mixing of microscopic red particles with the water, the characteristics of which are unusual. As noted by Godfrey Louis and Santhosh Kumar (Mahatma Gandhi University) in their paper on the subject, the particles vary from 4 to 10 microns in size and appear under magnification as red-colored glass beads. Electron microscope work shows them to have “…a ﬁne structure similar to biological cells.” 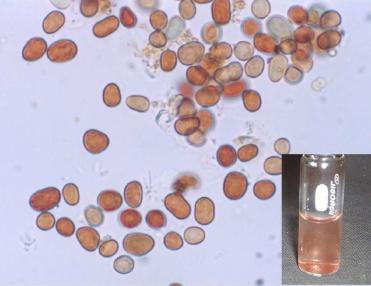 And although they look something like unicellular organisms, the particles show no nucleus, although dyes reveal ‘…a layered structure after the dye penetration.’ They’re also quite stable over time, showing no decay or discoloration after storage without preservatives for over four years. No trace of RNA or DNA can be found.

Moreover, the major elements found in these particles are carbon and oxygen. The amount of material is substantial: With more than 100 reported cases of red rain, the authors surmise that, at minimum, over 50,000 kg of red particles are involved. They rule out particles washed out from rooftops or trees, and find it unlikely that, given the wide dispersion geographically, the particles are pollen or fungal spores. Nor do they believe a serious case can be made that the red rains were caused by desert dust.

A meteoric origin thus cannot be ruled out. From the paper:

The red rain phenomenon ﬁrst started in Kerala after a meteor airburst event, which occurred on 25th July 2001 near Changanacherry in Kottayam district. This meteor airburst is evidenced by the sonic boom experienced by several people during early morning of that day. The ﬁrst case of red rain occurred in this area few hours after the airburst event. This points to a possible link between the meteor and red rain. If particle clouds are created in the atmosphere by the fragmentation and disintegration of a special kind of fragile cometary meteor that presumably contain a dense collection of red particles, then clouds of such particles can mix with the rain clouds to cause red rain. The atmospheric fragmentation of the fragile cometary meteor can be the reason for the geographical distribution of the red rain cases in an elliptical area of size 450 km by 150 km.

Upshot: The authors argue strongly for an extraterrestrial origin and consider the red rain a possible case of panspermia. The source could be cometary, as has been argued before by Fred Hoyle and Wickramasinghe (in “Comets – A Vehicle for Panspermia, Astrophysics and Space Science 268, pp. 333-341). The paper is “The Red Rain Phenomenon of Kerala and Its Possible Extraterrestrial Origin,” accepted for publication in Astrophysics and Space Science, and available here. Thanks to Luke Schubert for the pointer to this one.

Centauri Dreams‘ take: The authors seem too quick to dismiss terrestrial alternatives. That the particles in Kerala’s unusual rains deserve further study is obvious. What isn’t clear is why more conventional explanations are getting such short shrift. If Kerala is a case of panspermia caught in the act, surely the best way to demonstrate it is through a series of studies that convincingly discount the pollen and dust hypotheses, while running additional tests on those odd, cell-like structures. Drawing potentially breakthrough conclusions from evidence that has yet to be fully analyzed is questionable science.