ET in a Grain of Sand?

Centauri Dreams was amazed to realize that almost two years have passed since Christopher Rose and Gregory Wright posed a bold challenge to SETI researchers. In an article in the September 2 (2004) issue of Nature (a cover story, no less), the duo suggested that we are more likely to achieve extraterrestrial contact through artifacts — organic material embedded in an asteroid or comet, say — than through radio or optics. Larry Klaes, posting a link in a comment here on the Rose/Wright discussion, recently jogged my memory about this article, which deserves a renewed look. 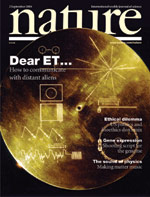 Rose (Rutgers University) is a professor of electrical and computer engineering; his work with wireless technologies convinced him that “…it’s often MUCH (many many orders of magnitude) better from an energy use perspective (and perhaps from others like message persistence at the destination) to write a message down in some medium and LITERALLY toss it to the recipient than it is to radiate the message electromagnetically — assuming delay beyond light transit time can be tolerated.” He and physicist Wright (Antiope Associates) explored this notion in a piece that should remain required reading for anyone serious about the SETI hunt. They maintain current work on the idea on their Cosmic Communications page, from which the above quote is drawn.

The problem with artifacts, of course, is time. If we’re in a hurry, then we want to get the word out (or receive it) the fastest way possible, and with our current technology, that means working via radio or optics at the speed of light. But if we can extend our thinking to messages not so much for conversation as for archival purposes, recording the great works of a civilization (think of the Voyager golden discs), then imagine sending a highly compressed matter packet on a journey of millions of years. And imagine looking for such messages here.

From the original paper:

Any message presumably arrived after the Solar System became habitable (that is, after most of the protoplanetary debris had cleared), so whatever carried the message would be less eroded by impacts than an asteroid. Interplanetary radar could search for objects with anomalously smooth radar signatures. Alternatively, a message could have a retroreﬂector attached to produce an anomalously large radar cross-section. Of course, an even simpler strategy is to use a powerful radio beam to illuminate these regions and see whether anything answers back. More active message types (ecological seeds or probes) are also conceivable, but are not necessary to exploit inscribed-matter efﬁciency.

Shades of Scottish astronomer Duncan Lunan, who once discussed a ‘phantom’ radio echo from the outer Solar System as a possible return signal from a space probe from Epsilon Bootes! I’m glad Larry noted Rose and Wright’s work in his recent comment, as it was apropos of another proposal to fling matter at a distant star, namely, a relativistic probe to Alpha Centauri whose effects upon the presumed debris disk there would announce its arrival. Who is to say that such objects have not come to our own Solar System, perhaps in far more complex form, with the obvious conclusion that we may be more likely to find evidence of extraterrestrials in nearby space than by trying to detect anomalous radio signals from other stars or looking for optical beacons.

Evidence for ET in a grain of sand? I find it a beautiful concept. The older SETI paradigms benefit when we bring such robust questioning to their premises. You can learn more about Christopher Rose and Gregory Wright on their respective Web sites. Centauri Dreams‘ original 2004 story on Rose and Wright’s work is here.

Next post: Two Ways to Look at the Future