RS Ophiuchi, a binary system some 5000 light years from Earth, has given astronomers plenty to talk about since February, when it suddenly brightened. The phenomenon wasn’t unusual — RS Ophiuchi undergoes periodic outbursts — but this was the first since 1985, allowing powerful radio telescope arrays to study the results. By coordination between radio telescopes from South Africa to China, Hawaii to the UK, astronomers have pieced together the sequence of events that led to the explosion and have studied its aftermath.

The results are reported in the July 20 issue of Nature, revealing that a mere two weeks after first reports of the stellar eruption, an expanding blast wave extended to a distance of 10 AU. It was triggered by a nuclear explosion on the surface of a white dwarf that had been capturing gas from the nearby gas giant it orbits. Once enough gas collects on the white dwarf, a thermonuclear reaction begins, with the white dwarf’s energy output increasing to over 100,000 times that of the Sun. 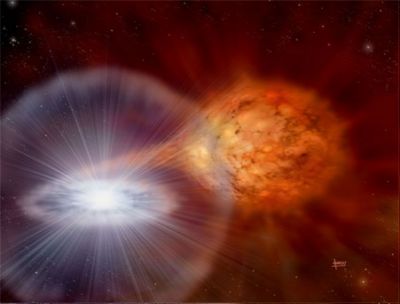 Image: Artist’s impression of the binary system RS Ophiuchi. Hydrogen-rich gas is transferred from a red giant onto the surface of a white dwarf and has just exploded there. Credit: David A. Hardy & PPARC (www.astroart.org).

The gas, meanwhile, is ejected at several thousand kilometers per second, striking the atmosphere of the red giant and setting up blast waves that accelerate electrons close to the speed of light. The radio emissions of these electrons as they move through magnetic fields in the vicinity of the binaries are what the astronomers are examining.

The beauty of modern radio telescope work is that it can quickly become global in scope. With initial observations on the Very Long Baseline Array (VLBA), which extends from Hawaii to the Caribbean, the team continued to track the outburst using facilities in the USA (the Very Large Array) and the UK (MERLIN), as well as Europe’s VLBI Network, which includes telescopes in South Africa and China.

“A week after our first observations, we combined telescopes across Europe with two in China and another in South Africa and were surprised to find that the blast wave had become distorted. Over the next few months our observations have shown it turning from a ring into a cigar-like shape. It’s going to need a lot more work to understand exactly what causes this but either the explosion shoots jets of matter in opposite directions or somehow the atmosphere of the red giant is shaping the ejected material.”

Further explosions on RS Ophiuchi are inevitable as gas builds up again on the white dwarf. Are we seeing a supernova in the making as the white dwarf increases in mass, or is the tiny star shedding everything it captures from the red giant with each dramatic outburst? That’s one major question that future work on this distant binary should answer. The paper is O’Brien, Bode, Porcas et al., “An asymmetric shock wave in the 2006 outburst of the recurrent nova RS Ophiuchi,” Nature 442 (20 July 2006), pp. 279-281 (abstract here).