The super-massive black holes thought to lurk in nearby galaxies present us with a problem. They should suck in surrounding gas and dust to produce x-rays, and it has been the assumption that black holes hidden by such materials, also known as ‘Compton-thick objects,’ are responsible for much of the overall x-ray background. Yet an x-ray census using data from Integral, ESA’s orbiting International Gamma Ray Astrophysics Laboratory, showed that a mere 15 percent of black hole galaxies detected were of the hidden Compton-thick variety.

And later work at NASA (GSFC) and the Integral Science Data Centre (Geneva), using two years of Integral data, shows an even smaller fraction. So where do the x-rays come from? “Naturally, it is difficult to find something we know is hiding well and which has eluded detection so far,” says Volker Beckmann (NASA GSFC, and lead author of an upcoming paper on the subject). “Integral is a telescope that should see nearby hidden black holes, but we have come up short.” 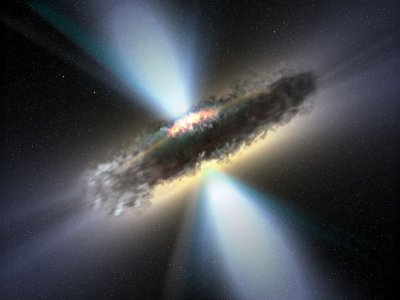 Image: This artist’s impression shows the thick dust torus that astronomers believe surrounds many supermassive black holes and their accretion discs. When the torus is seen edge-on as in this case, much of the light emitted by the accretion disc is blocked, creating a “hidden” black hole. Credit: ESA / V. Beckmann (NASA-GSFC).

The implication is that if hidden black holes really are the source of most of the x-ray background radiation, they must be located in the distant universe. That could be the outcome if the super-massive black holes near us have all had time to consume the gas and dust that once surrounded them, leaving them with little material to feast on. After all, the x-rays used in these observations are produced by the heating of such material as it falls into the black hole, and a lack of gas and dust would make the black hole much harder to detect.

Larger surveys are ahead, hoping to track the evolution of black holes going back into earlier epochs. Such surveys (one is planned using data from the Swift spacecraft) may show whether this revised theory is viable, or whether nearby black holes are simply hidden much more deeply than previously believed.

Next post: Cosmological Mystery: Line of Sight to a Quasar