When is a galactic grouping ‘compact’? Take a look at the four closely grouped galaxies in the image below; they’re most of the galaxies in Stephan’s Quintet (the fifth is off-image to the lower right). Redshift measurements indicate that the top three of these are at the same distance from us, about 300 million light years away in Pegasus. A group is considered compact when it shares the same gas reservoir, or so I learned while reading about a presentation on the subject made by C. Mendes de Olivera at the ongoing IAU meeting in Prague. 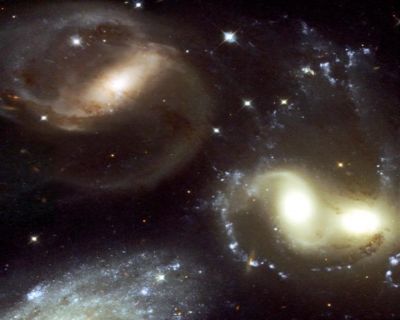 Image: Four of the galaxies of Stephan’s Quintet. The galaxy at bottom left is a foreground object, but the other three are at the same distance from us and engaged in spectacular gravitational interactions. Credit: Jane C. Charlton (Penn State) et al., HST, ESA, NASA.

I owe the opportunity to learn about these matters to Ph.D student Thomas Marquart, who is working in the Galaxy Group at Uppsala Astronomical Observatory in Sweden. Marquart is posting regular entries on the IAU’s General Assembly on a weblog and is inviting (though with little result so far) other participants in the meeting to post their own thoughts as the sessions continue. In any case, his own observations, largely focusing on galactic evolution, make for lively reading and offer a sense of participation in a major scientific event.

One that, it must be said, has more to do than focus on the status of Pluto, despite newspaper stories implying that the subject has conference goers on the edge of their seats. Better by far to read about the IAU’s work at a site like this, and let’s hope that weblogs, which are easy to set up, become a regular part of such scientific gatherings. Sure, they’re unofficial, and that’s their interest. They give you inside thoughts rather than press releases, with comments on the hot issues and insights into the personalities involved.

And yes, as to Pluto, my thinking remains the same. Whatever the IAU decides is fine by me, though if it were my decision, I would leave Pluto with a planetary designation and simply declare its size the lower limit for planets. There are good reasons for acknowledging its properties as a Kuiper Belt object, but it’s also true that we have much to learn about the Kuiper Belt and what it contains. The safer course, keeping us from changing our nomenclature every few decades, would be to defer any change of planetary status until we’ve had a closer look at Pluto and other Kuiper Belt objects, starting with New Horizons in 2015. More on this tomorrow and then on to more pressing things.

Next post: Ceres and Charon: A Matter of Gravity