Gravitational lensing, discussed here recently as the motive for the FOCAL mission to the Sun’s gravity lens, is suddenly back in the news. This time it’s being used to make measurements of dark matter of a startlingly precise kind, measurements that in some quarters are being hailed as the first solid evidence that dark matter exists. Views of two merging galaxy clusters at optical and x-ray wavelengths are involved, with gravitational lensing being used to examine their mass.

The clusters under investigation seem prime candidates for this kind of work. Douglas Clowe (University of Arizona), who led the study, explains its significance:

“Prior to this observation, all of our cosmological models were based on an assumption that we couldn’t prove: that gravity behaves the same way on the cosmic scale as on Earth. The clusters we’ve looked at in these images are a billion times larger than the largest scales at which we can measure gravity at present, which are on the scale of our solar system.”

And that’s the key: if we make the assumption that gravity does indeed work the same way in the distant cosmos as it does locally, then the movement of galaxies leads to the inevitable conclusion that visible matter is only part of the universe, that there must be, in fact, five times more dark matter than the matter we can see. If there were not, galaxies would quickly fly apart from the gases within the clusters.

In the clusters under study, this gas is in the form of a plasma of hydrogen and helium created in a 10 million mile per hour collision. The collision produces drag on the gas, which shows up here in the form of a bullet-shaped cloud that is being shaped by the event. Usefully, the hot gas is affected by drag, but dark matter is not. The team can analyze the patterns of distorted light — the gravitational lensing caused by the gravity of the clusters being studied as it distorts the light from background galaxies — to extrapolate the mass of the clusters themselves and find out where most of that mass is located.

The result: The dark matter, which passes through the cluster collision without interacting with normal matter, has moved ahead of and apart from the hot gas, which did interact. And the dark matter is far more massive than the ordinary matter in the gas cloud. “The bottom line is, there really is dark matter out there,” said Dennis Zaritsky (University of Arizona). “Now we just need to figure out what it is.” 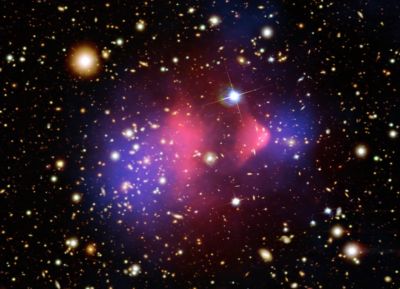 Image: Hot gas detected by Chandra in X-rays is seen as two pink clumps in the image and contains most of the “normal,” or baryonic, matter in the two clusters. The bullet-shaped clump on the right is the hot gas from one cluster, which passed through the hot gas from the other larger cluster during the collision. An optical image from Magellan and the Hubble Space Telescope shows the galaxies in orange and white. The blue areas in this image show where astronomers find most of the mass in the clusters. The concentration of mass is determined using the effect of so-called gravitational lensing, where light from the distant objects is distorted by intervening matter. Most of the matter in the clusters (blue) is clearly separate from the normal matter (pink), giving direct evidence that nearly all of the matter in the clusters is dark. Credit: Credit: X-ray: NASA/CXC/CfA/M.Markevitch et al.; Optical: NASA/STScI; Magellan/U.Arizona/D.Clowe et al.; Lensing Map: NASA/STScI; ESO WFI; Magellan/U.Arizona/D.Clowe et al.

Centauri Dreams‘ take: Readers sometimes ask what obscure subjects like dark matter (and the even more mysterious ‘dark energy’) have to do with propulsion and travel between the stars. It’s clear that they have everything to do with the basic forces that control matter’s interactions and with the age and composition of the cosmos. But these are broader subjects than the specific issue of interstellar travel.

The answer is that the makeup of the universe tells us a great deal about our propulsion options, and when it comes to interstellar flight, propulsion is the name of the game. Dark matter forces us to understand mass, with all that implies about accelerating objects to appreciable fractions of the speed of light. Dark energy leads us to contemplate the repulsive forces that push against the fabric of space, leading to space drive concepts that may one day become reality. Understanding these fundamental components of the universe could provide the breakthrough we need to venture out into the galaxy.

The paper is Clowe, Bradac, Zaritsky et al., “A direct empirical proof of the existence of dark matter,” scheduled for publication in Astrophysical Journal Letters and available online.

Update 8/24/06: For a more detailed analysis of this research, see this Cosmic Variance post, and check out as well Anthony Kendall’s fine article here.

Next post: The Latest on the Tau Zero Foundation