Weekend Vista: Into the Magellanics

Now and then it’s good to step back from interstellar advocacy, especially on a weekend, and just look at the sky. To that end, the photograph below can be considered an object of contemplation, something to quiet the rush of the work week and return the mind to the far reaches. You’re looking at a region within the Large Magellanic Cloud that contains hot blue stars, some of them brighter than a million Suns. That kind of energy pushes stellar ‘winds’ — charged particles moving at tremendous speeds — out into the surrounding interstellar gas. 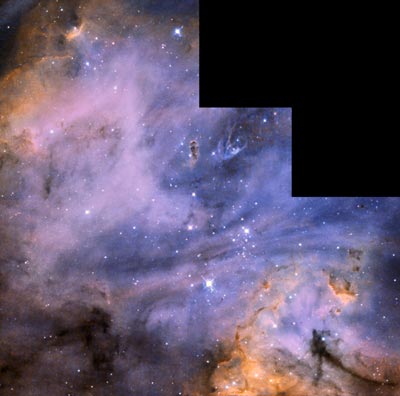 Image: This active region of star formation in the Large Magellanic Cloud (LMC), as photographed by NASA’s Hubble Space Telescope, unveils wispy clouds of hydrogen and oxygen that swirl and mix with dust on a canvas of astronomical size. The LMC is a satellite galaxy of the Milky Way. Credit: NASA, ESA, and the Hubble Heritage Team (STScI/AURA).

And look at those dust streamers running the length of the nebula, as well as the bright orange of dust clouds at bottom right and top left. Put enough charged particles into this environment and you begin to compress the interstellar dust, leading to another round of star formation. Filters were used on this Hubble image to isolate and colorize the hydrogen and oxygen gas, achieving this lovely result. The image was made in 1998 by Hubble’s Wide Field Planetary Camera 2.