A Closer Look at Centauri Space

Asteroseismologists — the people who study the oscillations of stars to examine their internal structure — can tell us a good deal about Alpha Centauri, and specifically about Centauri B, a K-class star which has also been carefully measured with the techniques of long-baseline interferometry. But a problem arises when you compare their mass estimates of the star with radial velocity studies, for the mass estimates of each differ by 28 Jupiter masses, plus or minus 9.

Is the discrepancy a data analysis error or an indication of something more interesting? Pondering whether it might show the existence of a companion for Centauri B, a French team has searched for the presence of such an object and, in the process, has built a catalog of background objects detectable with adaptive optics, using the European Southern Observatory’s Paranal site in Chile. 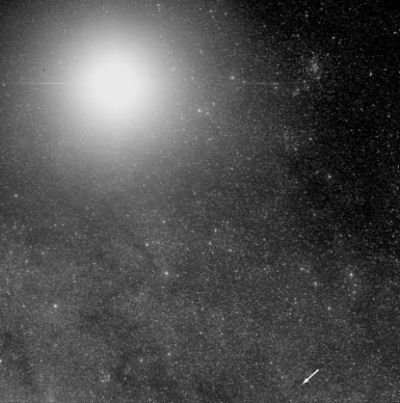 Image: They look like one huge star in this photograph, but Centauri A and B simply overwhelm the view with their glare. Remember, we’re talking about a close binary here, separated by about 23 AU on average. Notice the arrow showing the location of Proxima Centauri, some 10000 AU from Centauri A and B and the closest star to Earth. The French team used the Nasmyth Adaptive Optics System of the Very Large Telescope coupled to an infrared camera for its work. This photograph, not a part of the French study, comes via the European Southern Observatory and the 1-Meter Schmidt Telescope.

The result: No companion objects were found, although 252 faint background objects were catalogued. The negative result gives us an upper mass on companions of Centauri B of 20-30 Jupiter masses, reinforcing the notion that planets around this star, if they exist, are likely to be orbiting close to it (within 5 AU) and to be less massive than a few times Jupiter mass. And the news is encouraging in terms of future planet hunting with these instruments. From the paper:

Stars younger than α Cen could be more favorable targets, as the brightness of massive exoplanets is predicted to decrease steeply with time. However, the faintness of the detected background sources conﬁrms the capabilities of modern adaptive optics instruments like NACO for exploring the close environment of very bright stars and for searching for massive exoplanets.

Centauri Dreams‘ take: Recent models of the Centauri system have focused on the viability of smaller, rocky worlds inside 4 AU around either Centauri A or B, but it is useful to begin ruling out other scenarios through observation, and particularly helpful to demonstrate the capabilities of instruments like these for such detections. In this case, then, no planet news is still good news because it advances the state of the planet-discovery art, while producing no negative implications whatever for terrestrial Centauri worlds.

The paper is Kervella, Thévenin, Coudé de Foresto et al., “Deep imaging survey of the environment of α Centauri: I. Adaptive optics imaging of α Cen B with VLT-NACO,” available here, and accepted for publication in Astronomy & Astrophysics.