Putting a brown dwarf into the same stellar system with one or more known planets seems like a dicey proposition, but we know it sometimes occurs. Radial-velocity studies have already detected systems like HD 38529 and HD 168443 that include a brown dwarf and known planet. In both these cases, the brown dwarf involved is known to revolve around the exoplanet host star in an orbit at least ten times wider than that of the planet found there. But there are more unusual possibilities: A brown dwarf around the star HD 202206 actually moves inside the orbit of the known exoplanet there. Look no further if you need a new science fiction setting.

Until now, we’ve never had a direct image of a brown dwarf around an exoplanet host star, but a new paper changes all that. A German team led by Markus Mugrauer (University of Jena) provides just such a detection, as shown in the image below. The star is HD 3651, a K-class dwarf near the boundary between Pegasus and Pisces some 11 parsecs from Earth; its mass is about 80 percent that of the Sun. What we know about its planet is that it is a small Saturn-class world in a highly eccentric orbit with a semi-major axis of 0.284 AU (think of the ‘major’ axis of an ellipse as its longest diameter, while the ‘semi-major’ axis is half of that). 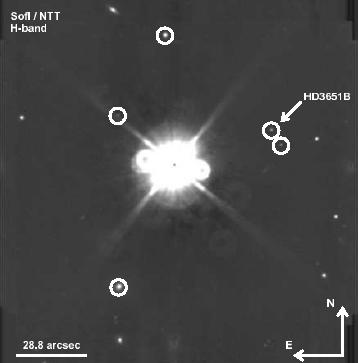 Image: Note the arrow isolating HD 3651 B, a brown dwarf in an exoplanetary system. Other candidate objects, which did not turn out to be associated with the primary star, are shown in circles. Credit: Markus Mugrauer and team, ESO/NTT and UKIRT (United Kingdom Infrared Telescope).

The team detected five faint objects around HD 3651, as shown in the image, but found that only one shared the host star’s proper motion. Based on these observations, the brown dwarf now called HD 3651 B is thought to be about 480 AU from the primary, and the possibility that it is a white dwarf can be ruled out because of its faintness in the optical spectral range. We are evidently looking at a T7 brown dwarf with a temperature between 800 and 900 K.

Interesting? You bet. The more we can learn about brown dwarfs in exoplanetary systems, the more we can refine our models of how such objects are formed, and how both brown dwarfs and planets might emerge around the same primary star. The paper is Mugrauer et al., “HD 3651 B: the ﬁrst directly imaged brown dwarf companion of an exoplanet host star,” accepted for Monthly Notices of the Royal Astronomical Society Letters and available online here.