What are being described as the ‘deepest infrared and optical data ever taken’ provide a new picture of the early evolution of the universe. Researchers have observed hundreds of bright galaxies from the era around 900 million years after the Big Bang and compared this catalog with a deeper look 200 million years earlier in time. The result: Only one galaxy, using the strictest criteria, turned up in the earlier period, an indication of vast changes in those 200 million years.

The work comes from Rychard Bouwens and Garth Illingworth (University of California – Santa Cruz), who used the Hubble Space Telescope to look at early galaxy formation in dark patches of sky like the Hubble Ultra Deep Field and the Great Observatories Origins Deep Survey fields. The mechanism at work in this period of galactic evolution seems obvious. Says Illingworth:

“The bigger, more luminous galaxies just were not in place at 700 million years after the Big Bang. Yet 200 million years later there were many more of them, so there must have been a lot of merging of smaller galaxies during that time.”

This was an era only a few hundred million years after the formation of the first stars. At these distances, astronomers are unable to detect the infant galaxies that would have merged to form the galaxies under study, which are themselves much smaller than the Milky Way. But it is likely that we are looking at galaxy precursors in measurements of the cosmic background radiation from the Wilkinson Microwave Anisotropy Probe (WMAP), showing up as density fluctuations in an otherwise homogeneous universe around 400,000 years after the Big Bang. 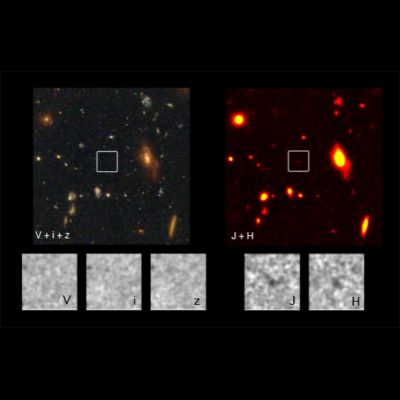 Image: Images of a galaxy at redshift 7.4 (inside white box) in the Hubble Ultra Deep Field. This galaxy is seen just 700 million years after the Big Bang. The galaxy disappears at optical wavelengths (left), but is seen clearly in the infrared (right), as shown in the image boxes at the bottom. Credit: Rychard Bouwens, Daniel Magee/UC-Santa Cruz.

Centauri Dreams‘ take: The James Webb Space Telescope may provide the next breakthrough in early galaxy formation, but until then, consider how much we continue to depend on the cosmic microwave background to conduct such studies. Which is why Richard Lieu and team’s work, recently discussed in these pages, seems so jarring. The University of Alabama at Huntsville study found oddities in the CMB that raised the possibility of its not being in the background at all.

Bouwens and Illingworth’s work on infant galaxies, as do so many studies, dovetails naturally with an assumption of a non-local CMB, and it fits in so well with everything we know about the early universe that there must be other explanations for the Huntsville findings. But it will be fascinating to see how the Huntsville work can be explained in ways that preserve the CMB, and the untangling of that conundrum will surely offer another new key to understanding the universe’s earliest days.

For more on early galaxies, see the excellent First Galaxies site. The above work appears as Bouwens and Illingworth, “Rapid evolution of the most luminous galaxies during the first 900 million years,” Nature 443 (14 September, 2006), pp. 189-192 (abstract available online). In the same issue of Nature is equally provocative work by a Japanese team which has discovered a galaxy at 12.88 billion light years. That paper is Iye et al., “A galaxy at a redshift z = 6.96,” pp. 186-188 in the September 14 issue, with abstract available here.